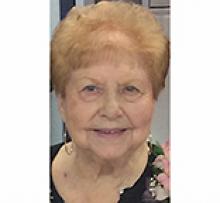 It is with heavy hearts that we announce the peaceful passing of May on October 8, 2021. She lived a long and full life.
May was predeceased by her mother Henrietta and daughter Denise. She leaves to mourn her passing her sons, Paul (Joyce) and Mark (Jo-Ann); son-in-law Ken; seven grandchildren and ten great-grandchildren.
There is a special place in the hearts of the entire LaFreniere family in May's friend of over 25 years, Terry Boutang. Those two girls were a going concern with volunteering at Manitoba Children's Festival, Manitoba Theatre Centre and sick visiting at St. Boniface Hospital, just to name a few.
May was very active with her children in their younger years, spending many hours at Glenwood Community Club and was part of the board while fundraising for the arena. She also followed in her mother's footsteps on the board of the ladies' auxiliary at Norwood Legion where she proudly wore her uniform (but wasn't crazy about the hat).
Once her children were getting a little older, May took to selling Beauty Counsellor and then took jobs with Palco Distributors and Statistics Canada where she built some lifelong relationships.
In her later years, when May was less mobile, she spent hours on the phone with friends and family. She was always very attentive and listening to people and right up to the end, had a memory for every detail of most conversations she was having and took an interest in their lives.
Because of Covid restrictions, a private family service is being held. A recording of the service will be available on Saturday, October 23, 2021 on the Voyage Funeral Home YouTube page.
In lieu of flowers, donations may be made to the Kidney Foundation at kidney.ca or the Heart and Stroke Foundation at heartandstroke.ca in May's name.