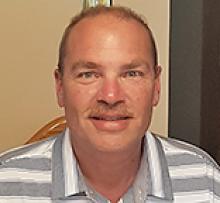 It is with heavy hearts and great sadness we announce the sudden passing of Keith Robert Bonin. Keith passed away peacefully, at home, on October 6, 2021, at the age of 59.
Keith was predeceased by his grandmother Bernice Greene, stepmother Elaine Bonin, stepgrandmother Pearl Kalmakoff, step-grandfather Nicholas Kalmakoff, great-uncle Theodore Close, mother-in-law Jeannette Noel and father-in-law Rudolph Noel.
To mourn Keith's passing is his loving wife of 34 years, Kathy Bonin; amazing daughters, Meghen Bonin (Andy Bergmann) and Chantelle Bonin; his parents, Hubert Bonin and Susan Sinclair; brother David Bonin, and sister Denise Bonin-Mount (Phil Mount). Keith also leaves behind many Noel family members and friends.
Keith was born in Edmonton on June 7, 1962. During his childhood he lived in Edmonton, Winnipeg, and Vancouver. When he was 19, he moved to Winnipeg and at the age of 22 met the love of his life, Kathy. They got married on May 16, 1987. A few years later, he became a father to two daughters - a role he treasured. Keith was always there to take Meghen and Chantelle to their after-school activities like soccer and volleyball, just to name a few. Keith was very proud of his family and was always their rock to lean on. He would give the best advice and his laughs could cure anything.
Keith was an honest, hard-working, down to earth man who had the charismatic ability to strike a conversation with anyone. His creative storytelling, ability to tell the funniest jokes and make people laugh were some of his greatest qualities. Keith worked at a few places throughout his life including Pier One Boating Company, Springhill, Rondex and CMAX.
Keith's interests included Nascar, playing hockey and baseball, the Winnipeg Jets, downhill skiing, fishing, the weather, travelling, spending time outside and above all else, being with family and friends.
Keith, your selflessness, strong character, and love will forever be cherished. We miss you with all our hearts.
A Celebration of Life will take place at a later date.
In lieu of flowers, donations may be made in Keith's name to a charity of your choice.