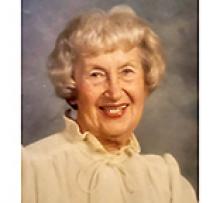 Jean Yates, aged 95 years, peacefully entered eternal life on October 10, 2021.
Jean had a beautiful and caring spirit, always bringing grace and kindness in her relationships. She was a devout servant of her Lord. She tended to the needs of many around her with patience and deep love. Her sharp wit, willingness to "tell it like it is", and contemporary intelligence was a blessing for her family. Her opinions were strong, yet her active respect for others, and enjoyment of conversation were always evident and inspiring.
Jean, and the love of her life David Yates, were the proud owners of five Pekinese dogs. Her love of animals continued throughout her life, and she always showed special attention to all her extended "Step-Pets".
Jean and Dave spent many years of their summer holidays on their Cabin Cruiser on Lake Winnipeg and the Red River and loved their winter vacations in Hawaii, Fort Lauderdale, St. Petersburg, Palm Springs and various parts of California. She often spoke of her joy around her special friendship with her sister Mary and brother-in-law Bill and their children, especially at family gatherings celebrating traditional holidays and birthdays.
Jean was employed by the Government of the Province of Manitoba at the St. Boniface Juvenile Family Court and the Court of Queen's Bench as Magistrate and Clerk of the Court where she enjoyed many happy years. She learned fluent French, to humbly best serve her community.
Jean was an Active Member of the Sts. Peter and Paul Ukrainian Catholic Church in St. Boniface and also of the Ukrainian Catholic Women's League of Canada Branch where she held executive positions including Secretary, and Treasurer. In 1994, she was a Member-at-Large in the first Sts. Peter and Paul Parish 50 plus Club Council.
As a member of the Holy Family Nursing Home Ladies' Auxiliary, she offered many hours volunteering. Jean was also a member of the Winnipeg Humane Society and did pet visitations to the St. Boniface Hospital. As a member at the South YM-YWCA, she was recognized for five years of volunteer service working with handicapped youth and adults. She also delivered Meals on Wheels in St. Boniface. Her other interests included membership in the Business and Professional Women's Club and the Winnipeg Horticultural Society. She took great pride in her gardening and flower arranging and was delighted to win First Prize for her Goodland Apples.
After the age of 70, Jean took up playing the guitar and joined the famous Musical Knights Orchestra. They played at parish functions, nursing homes, International Inn, Winnipeg Convention Centre and at festivals in Dauphin and Vegreville. They also played on TV and had recorded tapes and CDs. They took pride and enjoyment performing at the Winnipeg Centennial Concert Hall at the Children's 2000 Jubilee of Faith and Culture and at the Rusulka Ukrainian Dance Ensemble 40th Anniversary Gala performance in September 2003. After turning age 80, Jean remarked how she still felt like a "20-year-old" inside, and indeed her shy smile, and hearty laugh reflected her youthful energy.
Jean was predeceased by her husband and best friend, David on July 30, 1990 and by her parents, Stephen and Anna Kupskay, brothers Michael and John Kupskay, sister Mary Koltek, brother-in- law William Koltek, sister-in-law Dorothy Kupskay, and nephews Darwin Kupskay, Lance Summers and George Curtis.
Jean is survived by her sister-in-law Stephanie Kupskay; and nephews, Dr. Terry (Motria) Koltek, Peter (Sue) Koltek, Paul (Sol) Koltek, Dr. Mark (Lorraine) Koltek, John (Terri) Kupskay; and nieces, Mary-Lynne Curtis, Darcia (David) Light, Katrina Koltek, Elizabeth Ann (Julian) Kupskay, Lori Summers, Bonnie Jarf, and Lynn Vallentgoed; cousins, Marilyn Bird and Pat Werbicki, and their extended families.
Jean's family would like to extend our sincerest appreciation on behalf of Jean to the team at St. Martha's unit at the Holy Family Home, for their care of Jean through these past few years, and to Dr. P. G. Mehta, for his selfless compassion and excellence as her physician over the past many decades.
Divine Liturgy celebrating Jean's life will be officiated by Father Darren Kawiuk at Sts. Peter and Paul Ukrainian Catholic Church, in Winnipeg, on Saturday, October 16. Due to current COVID restrictions, only close family will be in attendance. Interment will be at All Saints Cemetery.
Pallbearers are Chris Koltek, Darcia Curtis, Chris Curtis, Will Koltek and Eli Koltek.
Honorary Pallbearers are Terry Koltek, Peter Koltek, Paul Koltek, Mark Koltek, John Kupskay, and David Light.
In lieu of flowers, donations can be made to Sts. Peter and Paul Ukrainian Catholic Church, 390 Marion Street, Winnipeg, MB R2H 0V9 or to a charity of one's choice.
Cropo Funeral Home in care of arrangements.