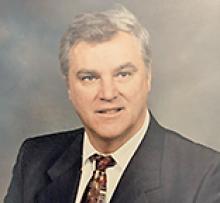 It is with great sadness that we announce the passing of our father, Brian Pedden, on October 3, 2021, at the age of 86 years, after a battle with cancer. Dad passed away at home with family by his side.
He was predeceased by his wife of over 60 years, Donna; his daughter Susan; and his parents, Wilbert and Audrey Pedden. He will be greatly missed by his daughter Allison; and sons, David (Lynda), Douglas (Cathy), Tim; and son-in-law Mike. His grandchildren, Tim (Leia), Scott, Clayton, Brittany (Matthieu), Megan, Samantha, Amber, Danny, Johnathan, Corey, Jordan; and his great-grandchildren, Logan and Sophie.
Dad was born in Kenora, Ontario and grew up playing various sports and exploring Lake of the Woods. It was Dad's passion for the lake that he has passed on to the next generations. The Island, or "Camp" is where the family spends many weeks each summer enjoying the lake.
Dad believed in giving back to the community and volunteered for various organizations such as the East End Community Club, Greater Winnipeg Bantam Football League, Heather Curling Club and Blue Goose International. He was the president of the Heather Curling Club and the Most Loyal Gander of the Manitoba Pond of Blue Goose. Dad and Mom traveled to many Blue Goose conventions around Canada and the States.
Both Dad and Mom graduated from Tec Voc High in Winnipeg. Dad attended United College studying business. He started his working career in the insurance business. It would become his lifelong career and his passion. He worked for various companies including General Accident, Prudential of England and ending his career at MPI. Always the underwriter, he was still pointing out bad risks, even in retirement.
As per Dad's request, cremation has taken place and no funeral service will be held.
In lieu of flowers, donations can be made to The Alzheimer Society of Manitoba 10 - 120 Donald Street, Winnipeg, MB R3C 4G2, The Canadian Wildlife Federation c/o Donor Relations, 350 Michael Cowpland Drive, Kanata, ON K2M 2W1, or, charity of your choice.

A tree will be planted and cared for by McKenzies Portage Funeral Chapel. www.mckenziesportagefuneralchapel.com 204-857-4021