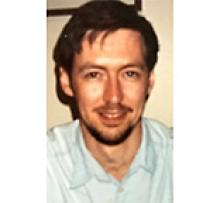 Suddenly at his home in Toronto, Jean Allec passed away at the age of 64.
He was predeceased by his parents, Joseph and Marie Allec; his brother Denis Allec, his nephew Jerry Cormier, sister-in-law Theresa Allec, his brother-in-law Terry Thiessen, and his very dear friends, Sean Hedderson and Timothy Morley.
Left to mourn his passing are his brothers and sisters: Claudette (Larry), Lucille, Robert (Julie), Louis (Daphne), Edith, Roger (Eliette), Leo (Gaylene), Suzanne (Romeo), Ginette, Raymond (Allyson) and sister-in-law Joyce Jongbloed (Denis). Jean will be fondly remembered by his dear and steadfast friends, Paul Bellini and Marie Allen; his Newfoundland family, Stella, Bernard, Terry, Carol, Joanne and Judy, as well as his many nieces and nephews. Finally he will surely be missed by his true and constant canine companion Autumn.
Jean or, Ti Jean, as he was affectionately known to his family grew up in Haywood, Manitoba the eighth of 12 children. He developed a passion for reading, writing and music at a very young age and these remained an important focus throughout his lifetime. It was during his last year in high school that he wrote and produced his play "The Well" which won the gold medal at the Divisional Drama Festival. The adjudicators described it as original, brilliantly written and executed. Jean graduated from St. Claude Collegiate and went on to attend the Faculty of Fine Arts at the University of Manitoba. Jean was a gifted pianist. He composed his own music mostly for his own pleasure but periodically he would perform it much to the delight of friends and family. Jean relocated to Toronto late in 1980 where he bloomed creatively, personally and professionally. He was hired as an Editor at Health Find 211 at its inception. He remained with the organization as it evolved eventually assuming the role of Editorial Manager. Jean described his work as both challenging and gratifying and he loved it. Jean believed in the power of communities and grass roots movements. He was a strong advocate for the rights and needs of the LGBTQ community.
While Jean was a devoted Torontonian he cherished his home province of Manitoba. He routinely returned to Manitoba every summer where he would reconnect with family, friends and of course his cherished sunsets. His gentleness and thoughtfulness belied a fiercely competitive nature particularly when playing Scrabble. He had a wicked sense of humour, a keen intellect, the best laugh ever and the most beautiful sparkling blue eyes. He is gone too soon and he will be sorely missed.
A memorial service will be held on Tuesday, October 19, 2021 at 11:00 a.m. EST at St. James Cemetery and Crematorium, 635 Parliament St., Toronto, Ontario. The service will be live streamed and remain accessible at obituaries.basicfunerals.ca or on UTube John (Jean) Allec Service
In lieu of flowers, a donation may be made to the United Way or to a charity of your choice.

Condolences can be left at obituaries.basicfunerals.ca