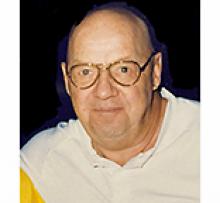 With profound sadness, the family of Ray (Shampoo) Charambura announces his passing after 92 amazing years. He was predeceased by his mother Olga Wasylkiw; his father Alexander Charambura; and his brother Eugene (Ollie) of Toronto.
Ray will be lovingly remembered by his daughter Gayle; granddaughter Kali; son Rik, who devoted so much time with him through the years; granddaughter Rowan; foster-daughter Jean; along with numerous nieces and nephews. His long-time partner Yolande Labossiere will deeply miss and cherish her 'Big Bear'.
Dad lived and breathed sports. From his early days growing up in Winnipeg's North End, surrounded by friends and colleagues who challenged and nurtured his development in every sport to which they put their minds, to his many years working in retail sales, mainly with MGM Sporting Goods, where he shared his expertise and experience, truly enjoying all of the networking and camaraderie at the Red-Top location.
Ray first honed his football skills while attending college in Pennsylvania, which eventually led to his returning home, joining the Winnipeg Blue Bombers and their drive to the 1950 Grey Cup, which is infamously remembered as the Mud Bowl. Dad also fondly remembered capturing the Canadian Intermediate-Senior Men's Football Championship in 1954 with the Winnipeg Rams.
Ray will always be remembered as, foremost, an athlete, but we would be remiss not to mention the other roles in which he excelled. In coaching, he managed the Molson Canadians Senior Men's Fastball team to a second-place finish at the World Championships in Oklahoma City in 1968. In administration, he was solicited to be the Commissioner of the Manitoba Senior Men's Hockey League. In officiating, he umpired Softball/Fastball for many years, both locally and at National Championships, as well as taught at numerous certification clinics in the province.
Ray was always quick to join in with any group that needed his support, such as goaltending with the Manitoba Oldtimers Hockey Team for many years, assisting with the Warroad Lakers, or even joining the local darts league.
Family will always appreciate Dad for his multifaceted talents, such as polishing off the New York Times Crossword Puzzle, and also his unassuming style and humility should someone mention his membership in the Manitoba Sports Hall of Fame or any other accomplishments. Dad was a fun-loving and kind soul, who spoke his mind as respectfully as needed. He had an incredible social intelligence to be both the 'life of the party', and a great ear to listen to the problems of others, and of the world. Rest in peace, Dad.
We want to send a heartfelt thank you to all of the friendly and supportive staff at Lions Manor for their special care and attention given to Dad in recent months.
At Dad's request, cremation has taken place, and there will be no formal service.
Donations in Ray's memory may be made to Sports Manitoba.