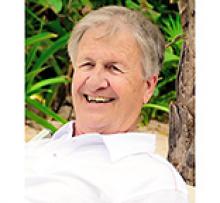 Generous and witty to the end, on what would have been his mother's 110th birthday, Jean quietly slipped away, avoiding the fuss of more goodbyes and unwanted praises.
Jean was born in Gravelbourg, SK, to Iréne and Armand, the second of six wild boys. The family settled in Winnipeg in 1960 where he enrolled at U of M and between frat parties, graduated with his BSc in Chemistry.
John met Vera Hanuschak, his life partner, in 1962 on a university train trip to Saskatoon. They married July 2, 1966, and had daughters, Christine (Tony) and Corinne (Craig). Jean was a loving husband and father, and the standard by which his sons-in-law are measured. To all his girls, Jean was their quiet strength and constant support.
Jean began his career as a chemist at Canada Packers, moving to pharmaceutical sales. With much success in the industry, he moved on to a second, less stressful career with Corrections Canada until his retirement in 2004.
He embraced his role as a Papa eagerly and was beloved by Avery, Kate, Will, Declan and Ella. He brought them pirate treasure maps, granted extravagant Christmas wishes, sponsored family trips to Mexico and loved them without reserve.
In recent months, Jean struggled with illness which he endured with grace, humility, and dry humour. He passed away surrounded by love and aching hearts.
Jean and family offer thanks to Josette Duprat for her steady vigil and the many health care staff who supported him: 6E Medicine, ER, ICU, Palliative Care at SBGH, Dr. Ismail Mohammed, his FP for many years, Drs. Paul Sawchuk and Sandip Bhangoo, helping him in recent months, and Dr. Al Buchel who made ER a friendlier place.
He is predeceased by his parents and older brother, Claude and survived by his wife, children, and brothers, Paul, Louis, Denys and Roger.
In keeping with Jean's wishes, cremation has taken place. A Celebration of Life is being planned. Further details will be updated on www.wojciksfuneralchapel.com.

Condolences may also be sent to www.wojciksfuneralchapel.com