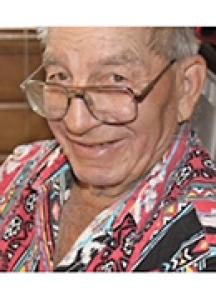 MASON, Charles (Charlie) Thomas passed away on October 14, 2021, at the age of 90, at the Souris Personal Care Home. Charlie was born September 14, 1931 in Wauchope, SK to Albert and Stella Mason. He was the eldest of six children. His siblings were Amy, Elsie, Eva, George and Fred. He grew up in Antler, SK and made the railroad his career, working for the Canadian Pacific Railway as a section man from 1951- 1986. On September 16, 1961, Charlie married Mabel Gudbranson in Oak River, MB. Charlie and Mabel raised three children in Alexander and later Souris, MB. Their children are Jim (Donna) and son, Matthew, John (Lara) and children Ben and Nicole, and Kathy and sons Andrew and Tyler. Charlie was known for his quiet, gentle nature and enjoyed a good laugh. After retirement, he and Mabel spent many hours in the woods, cutting and hauling wood for winter and babysitting grandchildren and children of friends. Mabel and Charlie spent their free time swinging on their porch swing and watching the people of Souris pass by on the highway and wave. Mabel passed away suddenly on March 8, 2013. Charlie's companion for the next few years was his trusty Siamese cat, who received half of each take-out burger. Charlie is survived by his children, grandchildren and great-grandchildren, his stepson, Hugh (Heather) Gudbranson and their children, Eric and Jody and their families, his brother Fred (Linda) Mason and his sister-in-law, Mary Mason. Due to Covid 19 restrictions, a private funeral service at a later date will be held with internment to follow at the Souris and Glenwood Cemetery Columbarium. In memory of Charlie, donations may be made to the Souris Personal Care Home.

Kowalchuk's Funeral Home, Souris
in care of arrangements. Expressions of sympathy may be made at www.kowalchuks.net