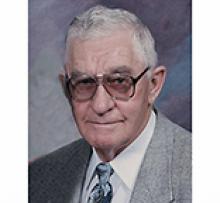 On Thursday, October 14, 2021, Henry G. Thiessen, age 94, passed away peacefully at Salem Home, Winkler, MB formerly from Altona and the Rudnerweide district.
Dad was born March 17,1927 in the Thames district to Abram and Maria Thiessen. He had 11 siblings. He was baptized in 1946, upon confession of his faith. One of his favourite verses was Ephesians 2:8-9, "For it is by grace you have been saved through faith – and this not from yourselves, it is the gift of God – not by works, so that no one can boast" (NIV).
Dad met our mom, Helen (nee Janzen) and they were married on September 12, 1948. After their marriage, they lived in Winnipeg for about a year. They then moved to the Rudnerweide district to start farming. Here they raised their four children: three boys and one girl. They farmed until 1990 when they sold the farm and retired to Altona. Dad greatly enjoyed singing with his eight brothers where they frequently entertained at different church functions including Personal Care Homes. In retirement, Dad enjoyed coffee times with his friends. Dad and mom enjoyed travelling to Florida, Ontario and some winters in Arizona. Their favourite was a bus trip to Alaska. God blessed them with 73 years of marriage and good health.
He is survived by his wife Helen, four children, Abe (Agnes) Thiessen, Anne (John) Klassen, Frank (Doreen) Thiessen, Ed (Mary) Thiessen; 10 grandchildren, 20 great-grandchildren, many nieces and nephews, one brother-in-law and one step sister-in-law. He was predeceased by his parents, eight brothers and three sisters.
A private family graveside service was held on Monday, October 18, 2021 at the Altona Cemetery. We, as a family, rejoice he has gone to his home in Heaven and we will meet again. The family would like to thank Salem Home staff for their excellent care during his stay there. In lieu of flowers, donations may be made to the Salem Foundation Inc.