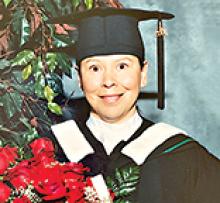 It is with a spirit of grace and gratefulness for a life well lived that the family and friends announce the peaceful passing of Madelain Hardisty-Neveau on October 19, 2021. She was 57.
She was predeceased by her parents, Edna and Arnold Hardisty; her grandparents, Philomene and Adam Hardisty and Madeline and Louis Bear; uncles, Joseph Boyd, George Hardisty and Louis E. Bear; nephews, Jason Young, Cory and David Hardisty, Quenton and Baby Boy Smith; brother-in-law Walter Starr; and in-laws, Charity and Ralph Neveau.
She will be remembered with love and affection by many friends and family, especially by her beloved husband Ralph Edward Neveau, who she had walked with since their marriage in 1997.
Madelain was very close to her siblings, Danny (Marian), Marcel (Bernadette), Carole (the late Walter), Donna (Charles), Victor (the late Roselyn), Norbert (Vivian), Laura, Brent (Rhonda), Rhonda (Art), and to many nieces and nephews of the Hardisty family including Saxony Hardisty and Carly Bear whom she helped raise.
She will also be remembered by her sisters-in-law, Debbie (Dave), Linda (Herb), Joanne (Manfred), and Cathy; brother-in-law Conrad (Nadine), and many nieces and nephews of the Neveau family.
Her memory will be held equally close by her daughter by custom adoption Charity and her husband Wallace Seymour and their children.
Madelain packed her life full.
Born into Hollow Water First Nation, Madelain adored the cliff-top ranch house her husband custom-built and together they hosted countless family birthdays and holiday get togethers.
From girlhood, Madelain pursued higher education; her strong sense of purpose and heartfelt determination for social justice propelled her into social work. She was a former employee of Southeast Child and Family Services, an Indigenous Agency in Manitoba and gave 28 years of service to her chosen profession.
She earned two undergraduate degrees and a graduate degree in social work and was an early advocate and pioneer of community-based child and family service programs in Manitoba.
She eventually shifted her focus to contract work in the mental health profession to further community development and family restoration.
She was a recipient of the Queen's Diamond Jubilee Medal (2012) for the work she and her husband did with the military. She travelled overseas twice in 2017 representing Indigenous contingents at memorials for service men and women in the battles of Vimy Ridge and Dieppe.
She assisted in delivering cultural camps for Indigenous youth with the Canadian Armed Forces together with her husband from 2008 to 2018.
A strong traditionalist, Madelain was involved in maintaining and preserving original Anishinabe Teachings for more than three decades.
Among her greatest joys was learning about her culture, language, history, science and laws, restoring their place and deconstructing the colonial frameworks which contributed to more than a century of assimilationist and genocidal policies in Canada against Indigenous people.
The abiding faith and the strength that her culture and language gave her, which she shared with the people she loved and worked with, marks among her greatest legacies.
She enjoyed making her own ribbon skirts, loved going to movies with her husband, friends and family and adored everything to do with the outdoors.
She loved visiting with her sisters and felt so enriched with the company of her nieces and nephews. She was as much at home on her quad as she was watching movies.
She was diagnosed with mesothelioma and kept going, taking day trips with her husband, friends and family and enjoying life. Her poise, her humour and her grace taught everyone around her how to live, even as cancer took over her life.
She will be interred at her home community Friday, following the four-day wake and a traditional ceremony at 12:00 noon, Friday, October 22 at Ed and Madelain's home.