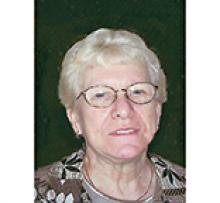 Peacefully, after a brief illness, Olympia (Ollie) Stopera (nee Gorda, Weir) on October 16, 2021, at the age of 84, passed away at the Health Sciences Centre in Winnipeg, Manitoba.
Olympia is survived by her loving husband Earl Stopera of more than 55 years; son Ivan Weir; brothers, William Gorda (Lloyd Fisher), Gerald Gorda; sister Margaret Dale (Allan); sisters-in-laws, Nel and Dora, and many nieces and nephews.
She was predeceased by her parents, Dennis and Mary Gorda; older brothers, Alex and Johnny; infant Peter, older sister Doris, sister-in-law Dianne, previous husband Herb Weir who died in a mining accident, and infant daughter Shannon Lynn Stopera.
Olympia was born in Shell Valley, MB and attended school in Blue Wing and Shell Valley, she was a lady of many talents. She worked as a homemaker, cook, post office clerk and a Teacher's Aide.
Olympia met Earl Stopera in Inglis, MB where he was a teacher and they married in 1966. She and her son Ivan supported Earl in the many communities they lived. As a young homemaker Olympia sewed, cooked, baked, and hosted large, family gatherings and assisted her husband wherever possible. To this day Christmas isn't complete without all the lovely delicious dainties she prepared.
In 1996 Earl retired from the teaching profession and Ollie also retired from her role as a teacher's aide. She was well liked by the students she worked with.
Some of their travels included a touring trip in Europe, a few trips to Victoria, BC, Hamilton, ON, the Atlantic Provinces and numerous trips to the USA.
She loved and was much loved by all who met her and will be sorely missed.
She has been cremated by Wojcik's Funeral Home in Winnipeg and will be interned in the Hillside Cemetery of Portage La Prairie where our infant daughter is buried.
There will be no Celebration of Life at this time.
To honour her you may want to make a donation to a charity of your choice.