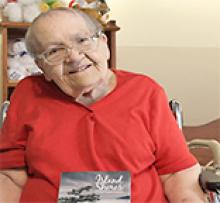 Helen died early on Friday morning, October 23, 2020, from Covid at Misericordia Place where she had lived for several years. She was 79 and was born on February 8, 1941. As a child, she lived in the Lamont/Skaro, Alberta area on a farm with her parents.
Helen is lovingly remembered by her beloved children, Delight Tucker and Michael Tucker.
Helen was a gifted poet and her poems were published in the Canadian Poetry Society's annual collection as well as local newspapers, Misericordia's newsletters and other publications. She is the author of two books for children, "Stories for Children" and "More Stories for Children". These were inspired by her childhood on the farm and her love of nature and her work as a nanny and in daycares in Manitoba.
She graduated from the University of Saskatchewan with a degree in English before moving to Manitoba. She lived with her first husband in the Arborg/Riverton area where she raised her two children. After his death, she moved to Altona with her second husband Ed Heppner.
Helen was a skilled Scrabble player. She was an avid fan of Elvis, the Little House on the Prairie series and its author Laura Ingalls Wilder. She loved animals especially cats. She enjoyed the view from her room overlooking the courtyard garden at Misericordia Place where she could watch the birds and squirrels. She liked salt and vinegar chips, homemade cookies, and watermelon. Helen had many health limitations having had unsuccessful knee replacement surgeries and also suffered from hand tremors. She used a typewriter to compose her poems, letters to newspapers and government about the state of healthcare in Manitoba.
Helen was a gentle, quiet person. She believed in God and through her poems expressed her love for the beauty of creation.
She was buried on November 19, 2020 at St. Vital Cemetery.