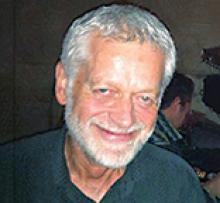 It is with deep sadness that we announce the sudden passing of John Monte Shopka, born August 22, 1950.
He was predeceased by his parents, John and Marie Shopka of Brandon and is survived by his son Eric, brother Michael of Vancouver, sister Janine of Saint John, North Dakota and his niece Bridget.
John was involved in the theatrical arts community for over four decades. He was well respected in the field and held the position of president and business agent of IATSE local 63 for a number of years. He travelled with the Royal Winnipeg Ballet to many foreign destinations including China, South East Asia, across Canada and the US with a stop in Hawaii. He began his career at Rainbow Stage in 1976 and was head carpenter for many years. John also worked for West Sun and worked with many community arts groups.
He was an avid outdoorsman and hiked many trails in Manitoba with his son. They also enjoyed several journeys to Vancouver and John's favourite, Tofino. He was always seeking new ways to expand his horizons.
There will be a tribute to John's life on Tuesday, November 9, 2021 at the Centennial Concert Hall at 1:00 p.m. The Centennial Concert Hall is a double-vaxxed venue.
In lieu of flowers, think positive thoughts and be kind to one another.