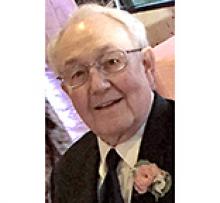 We are saddened by the loss but celebrate the life of John Moore, beloved husband, father, grandfather, and great-grandfather who passed away peacefully on October 14, 2021 at St. Boniface Hospital at the age of 82.
He leaves to mourn his three children, Catherine Sigurdson, Jamie (Claudie), Kevin (Kristi); 12 grandchildren, Shawn, Kerstin, Deanna, Erin, Jeremy, Michael, Jake, Justin, Tyler, Tai, Ryan, Ashley; and six great-grandchildren, Davin, Jordan, Jared, Austin, Charlotte, and Waylon. He was predeceased by his wife Sandra and his brother Bill. John will also be forever remembered by his sister Lorraine (Rick) Lahnert; sisters-in-law, Liz Moore, Barbara Den Boer, and many nieces, nephews, and dear friends.
John was born on October 26, 1938 in Brandon, Manitoba and he resided in multiple parts of Canada with most of his time spent in Winnipeg. He met the love of his life, Sandra, and they were married in 1961 before moving to Montreal and Tweed in 1965. When they returned in 1968, John achieved a 23-year career at Great West Life as a Manager of Investment Administration. As a father, John played many roles: mentor, coach, cheerleader and motivator. He gave his time freely to support all his children's activities and sports while also serving the community on the Kiwanis board and many political campaign committees. John and Sandra spent 20 years of their retirement as snowbirds travelling between Winnipeg and Chandler, AZ. They cherished these years together as they established many new friendships and hobbies. John gave selflessly and anonymously to everyone around him and there is no doubt that he has touched countless lives.
The family would like to extend sincere appreciation and heartfelt thanks to the staff at the Wellington Retirement Residence where John has lived for the past five years. They were a second family to John and their availability and compassion over the past two years helped him get through some challenging times.