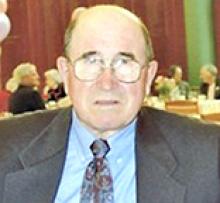 After a brief illness and a good, long life Ivan passed away peacefully at the St. Boniface Hospital on October 16, 2021, at 93 years old.
He was predeceased by his wife Theresa, stepson Jimmy and granddaughter Desiree, plus his immediate family in the old country. Left to mourn is his son Teddy; stepsons, Gerry (Nicole), Tommy, and his grandchildren; also his many in-laws who live in the Portage la Prairie area.
Dad was born in Draganovo, Bulgaria on April 12, 1928. After living in Austria after the war helping his uncle on the farm he immigrated to Canada in May of 1949. After settling in Canada he became a outside construction worker for 46 years, first with Baldry Engineering and then with Pile Foundations where he retired in 1994. He met our mom in 1951 and was with her for 63 years until her passing. After love of family and work Pops was a avid sports fan who was a Blue Bomber season ticket holder for 30 years. He played soccer as a young man and always enjoyed watching a match live at old Alexander Park or on TV especially the World Cup. Sundays were for NFL Football on TV. John was well known as a regular at the neighbourhood "watering holes" first with his old crew at the Pemby and then the new crew at the Camby. Pops liked to let everyone know that he had his first beer in Canada at the Cambridge Hotel in 1949 and we are happy that we got him down for his last beer there in late August. Dad and Mom did extensive travelling in retirement taking the senior bus tours all over North America plus many trips to Las Vegas. They made three trips to see Europe, one being an emotional return home to visit his two brothers in Bulgaria. Dad also loved tinkering in the yard and vegetable gardening and flower planting at the family home where he stayed until just last fall at the age of 92. His last year was spent very comfortable and looked after as he moved in with Gerry and Nicole where they took good care of him.
Dad was a animal lover and loved all our family pets especially his last buddy of 20 years - Min-Min the cat. When we moved him out of the family house his biggest worry was "who will feed the squirrels and birds now" as he always kept his feeders full. Therefore if you wish, in his honour, please make a donation to the Winnipeg Humane Society or an animal shelter.
Dad has been cremated with Neil Bardal in care of arrangements. There will be no formal service but the family will notify of when we will have a memorial for him as he will be interred with Mom in their niche at Brookside Cemetery.
The family would like to thank all of the medical professionals and support staff who took good care of him at St. Boniface Hospital especially during his last week on Ward 5E.