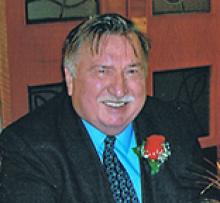 It is with heavy hearts that we announce the sudden but peaceful passing of Tony Rogodzinski on October 14, 2021.
Tony was predeceased by his infant son Daniel; parents, John and Pauline; brother Bill; sister Anne and his beloved wife Katie who came to bring him home to relieve him of his pains and heartbreak. Dad is in a happier place now beside Mom who was the love of his life.
Left behind to cherish all the memories are his children, Cliff (Dawn) and Glenn (Loni); grandchildren, Brenden, Josie and Brianna; brother Larry; sisters, Elsie and Adeline; along with numerous nieces, nephews, friends and amazing neighbours.
Steve and Anita, Evelyn, Rachel and Chris you are part of our extended family. You have helped a tremendous amount throughout the years and we are especially grateful for the help and support you all provided Dad with this past year. Thank you.
Tony was born on September 12, 1941 and was one of six children. He went to Malonton school which was one mile away from the homestead. The school had no hydro, they used a large wood furnace to heat it and had the luxury of going to the bathroom in the outhouse. Tony helped his family work the land by using horses and eventually they bought their first wheeled tractor with tires which they called Oliver. After which they ended up converting the horse-drawn equipment to tractor-pulled. Dad later returned to school to acquire his trades papers to become a blacksmith. He started his career at CP Rail for whom he worked a number of years then moved over to CN Rail in 1970 until his retirement in 1999. Dad met his love Katie and they were married on August 27, 1966. They eventually bought their forever home and that's when the real work began. He upgraded the house all while helping out other neighbours who were building at the same time. Dad was able to retire at an early age and he enjoyed every moment of it. He would spend hours out in his shed "workshop" building and welding different projects from railings, flower pot hangers and holders, whatever he could think of. He fabricated stairs, remodelled his house and helped his son Cliff remodel his first home. He enjoyed spending time with and helping both his sons, Cliff and Glenn with many projects over the years. Dad was a very social person and enjoyed visiting friends, relatives and going with Mom to meet up with the group at Robin's over coffee and enjoyed discussing things, coming up with ideas. Dad was always there to lend a helping hand to those that needed it.
Dad (Papa) never missed any of the grandkid's sporting or school events. Papa and Baba were always there cheering them on. He enjoyed taking them all out to the zoo and parks and out to visit auntie and uncles house. Papa loved puzzles crosswords and Sudoku and playing board games until the wee hours of the morning with the grandkids.

You are home now and together again.