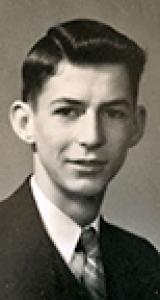 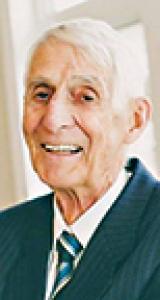 James Kerr MacDonald (Jim) passed away on October 9, 2021, with his loving daughters at his side. He was 94 years old. Jim was married for 69 years to Glenna Theresa (Coughlin) MacDonald, who passed away three days later.
Jim leaves behind his five daughters: Marlyn (Tom), Maureen (Bill), Kathleen (Hyman), Laurel (David) and Louise. He was blessed with 12 grandchildren: Eliza (Will), Thomas, Imogen (Jean-Luc); Erin (Stuart), Shauna (Adam); Andrew (Miriam), Marie-Helene (Alexandre), Erik (Sophie); Stephanie (Christopher), Mallory (Will), John (Stephanie); Brandon; and 10 much-loved great-grandchildren.
Jim was born on September 13, 1927 in Ceylon, Saskatchewan to Thomas and Mary (Bartlett) MacDonald. He was predeceased by his sisters, Lona Wilkinson (Doug), and Gail MacFadyen. He was Uncle Jim to many nieces and nephews.
Jim graduated from Weyburn Collegiate in 1945. He started his career in Thunder Bay, Ontario, working for the Canadian Bank of Commerce. He then made the move to Terrace Bay to work for Kimberly-Clark where he met his wife Glenna and where their five daughters were born. After 20 years Jim moved the family to Thunder Bay and then Winnipeg where he worked for Saskatchewan Wheat Pool for 21 years, and became the General Manager of the Terminal Division. Upon his retirement in 1989, he was praised for his financial acumen, his managerial success and his crucial understanding of the needs of the farmer / owners of the Wheat Pool. Jim's upbringing in rural communities in Saskatchewan, contributed to that deep knowledge and appreciation of the business of farming.
Jim had many lifelong interests that he shared with friends, family and the community. With Glenna at his side he loved to travel, dance and socialize at every opportunity. They developed lifelong friends everywhere they lived. Jim and Glenna enjoyed travelling together, especially to visit with friends, their daughters and grandchildren across Canada and overseas. Those visits were very important to them and enjoyed by all.
Jim was a Scout leader as well as an executive member of many organizations. He was often asked to emcee public events, which he conducted with aplomb and good humour. With his wife Glenna, he ensured that his children enjoyed a wide range of activities, including camping and much anticipated road trips to his sister Lona's farm in Saskatchewan. The trips were fun, but also very educational, as Jim pulled up at every historical, botanical and geographical sign so the family could stop, read and learn!
After retiring, Jim volunteered with a number of charitable organizations until he retired again at age 85. He taught literacy for the Laubach Literacy of Canada program, helped disabled people to partake in horse riding through the Manitoba Riding for the Disabled Association, and worked with a crew of much younger volunteers to build houses in a Habitat for Humanity Canada project in Winnipeg's North End. At 80 years of age, he was installing Victoria Lifeline call buttons for elderly people, many younger than himself.
Jim was very fit and active all his life. He was an avid outdoorsman. He curled and golfed several times a week right up until his late 80s. He loved to cross-country ski, and he walked daily. He never missed his daily routine of sit-ups, push-ups and pull-ups right into his 90s. He was an inspiration to all who knew him.
Our father, grandfather, great-grandfather, and uncle will be remembered and loved forever.
A Funeral Mass will be held at Mary Mother of the Church, 85 Kirkbridge Drive, Fort Richmond, Winnipeg, Manitoba, on Saturday, November 27 at 11:00 a.m. Please stay informed of current Covid restrictions at the time of the funeral, as numbers may be limited. The funeral mass will be available online for those unable to attend in person.
Place of interment is the Fort Garry Roman Catholic Cemetery.
In lieu of flowers, donations can be made to Rossbrook House Foundation, 658 Ross Avenue, Winnipeg, MB R3A 0M1.