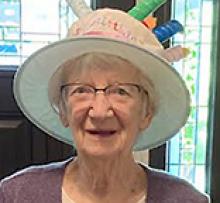 Donna Friesen (born Donna Fay Cruickshank) entered this world in Winnipeg on June 15, 1921 and left it on October 19, 2021.
Donna wanted to be a doctor but her family could not afford the cost. She practiced instead as a nurse, graduating in 1944, and saving her pennies to put herself through medical school. In 1950 she graduated from Faculty of Medicine at the University of Manitoba as the Lady Stick, part of the largest cohort of women in medicine. She practiced as a doctor from 1950 to 1987, beginning with the rehabilitation of patients suffering from polio. From 1961 she was a family physician at the Manitoba Clinic. She was an early feminist and featured on lists of physicians who supported a woman's right to choose.
She married Professor W. J. Patton on May 13, 1950 at the height of the famous flood and had three sons from a difficult first marriage, Andy, Matthew, and Jay. Her youngest son Jay became a bush pilot, and died when flying to a medical mission, a wound that never healed. On December 30, 1984 she was remarried, to Dr. William Friesen. Her expanded family now included daughters, Ida-Marie and Betty. With her new husband, she travelled extensively in retirement: visits to the ancient churches at Lake Van and a Nordic church carved from red rock remained vivid. She lived her later years at The Wellington where she was an active member of the community. In 2009 she received a Manitoba Active Living award.
Music and art were especially important to her. She sang in every choir she could, and in her 40s, took up the cello, which "touched her soul." Later she took up painting and drawing: at 97 she was drawing a tree encased in snow. Accompanied by cats until the last years of her life, she never forgot Truman, her beloved last Siamese. She celebrated her 100th birthday in style and wanted it known how much she loved the video messages sent by family from across the country. She had many friends and loved the world's rich variety. "Wherever I was at that time, I took a piece of it. That's who I am. I'm like a patchwork quilt. Each piece was something important to me." Shortly after her 100th birthday, she laughed and said, "I'm like that Apple on your computer, I took a bite of every experience I ever had."
Her husband, brother Earl and sisters, Vida and Beth died before her. She is remembered and mourned by her sons, Andy and Matthew, stepdaughters, Betty and Ida-Marie, daughter-in-law Janice and son-in-law Kevin, her grandchildren, Kate, Declan, Connor and their spouses and children, her nephew David and niece Margie, and many relatives and friends. Two younger friends, Karen Toole and Esther Klassen, were special: they revealed to her that close new friendships could blossom so late in life.
This obituary was written together with Donna: her one regret was not to include "everything she had forgotten."
A private celebration of her life will take place.