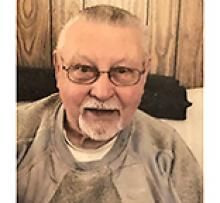 Leonard Amey of Winnipeg passed away October 19, 2021 at the age of 89.
Predeceased by his wife, Ruby Mary Patricia Amey October 24, 2005.
Len leaves to mourn his daughter, Susan; son, James and his children, granddaughters, Tara (Liam) McLauchlan, Andrea (Eric) Johnston, and great-grandchildren, Payton-Ruby Johnston and Lincoln-Anson Johnston; sisters, Marion Huntley and Marie Wyatt of London, Ontario, and many nieces and nephews and their children.
Born in London, Ontario in 1932, Len joined the army in 1950 (RCHA) and was stationed in Winnipeg where he met the love of his life Ruby Lane and got married in 1953. They then got stationed to Picton, Ontario, where Jim and Susan were born. Len served in the RCHA for 20 years, retiring as a Sergeant. The family travelled all over the world wherever Len was posted, USA, France, Germany and Shilo, Manitoba - three times now looking for a change and decided to retire in 1970. He was lucky to get a job with the Winnipeg Blue Bombers as the Equipment Manager for another 20 years, retiring in 1990 - three Grey Cups later. He loved all sports; playing and coaching the Gunners hockey and softball teams in Germany. Also, the heated battles with his son over the NHL, him a Toronto-Detroit fan and Jim a Chicago fan. He loved his CFL and the Bombers. He got involved in all helping his son coach women's softball and hockey, and watched his granddaughter Andrea in her soccer career. Len became an avid fan of anything Canadian, the women's hockey, soccer, curling teams and the men's also. A true family man, he loved whatever his kids and their families were involved in and was so proud of everything they did or accomplished. He loved having family around.
Len and Ruby loved to travel all over the world and wanted his family close by. He was a proud man and tough, and it was nice to see how the grandkids could get through that gruff exterior and the great-grandkids made him smile and melt. Len would love to talk about them after they left for hours. So proud he was of all of them and what they have done and succeeded at. He also helped many people and organizations out.
As he said Monday night watching WWE Wrestling…the Bombers are going to repeat they got a great team this year.
Many thanks to the Emergency and Fire Dept. crew and the nurses and doctors at the Grace for the care and compassion they showed him and family in his time of need.
Thanks also for the cards, gifts and calls from family and friends.
In accordance with Dad's wishes, cremation has taken place. Following cremation, there will be a private family interment.
In lieu of flowers, donations can be made to a charity of your choosing.