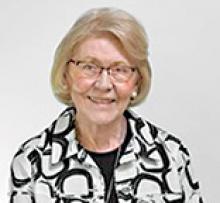 Sister Joan Mormul of St. Benedict's Monastery, Winnipeg, passed away at Holy Family Home on October 18, 2021.
Besides her Benedictine community Sister Joan is survived by her brother, Jack and sister-in-law, Maggie, her niece Jennifer and nephew Jeff of Peterborough, Ontario and their respective families. She was predeceased by her father John in 1978 and her mother Nellie in 2015.
Joan was born in her parents' home in Gilbert Plains, Manitoba, the first-born of two children. She entered St. Benedict's Monastery in Arborg, Manitoba in 1958. Joan became a teacher, teaching at St. Benedict's Academy and Morrison Schools in Winnipeg and in several schools in the Catholic Separate School District in Calgary, Alberta. She earned her AMM as a voice teacher and post-graduate degrees in Liturgy and Music from St. Joseph's College in Indiana and Theology from Regis College, Toronto.
Her first love and special gift was music. Her enthusiasm and ability to draw out beautiful music from the choirs she directed, especially those who loved to sing but had no formal musical training will be remembered by those who sang under her direction. Joan conducted numerous choirs, taught as a musical specialist and served as liturgical music director in the Dioceses of Antigonish, NS and Calgary, AB. Her favourite hobbies were playing the piano and knitting. There was a period in her life when fishermen knit sweaters were a regular production as she relaxed after her hours of working.
For eight years, Sister Joan worked as Director of St. Benedict's Foundation until her resignation in 2020 due to ill health.
Sister Joan had a special devotion to St. Anthony who helped her find many lost or misplaced items and a devotion to the guardian angels; her parish church in Gilbert Plains was named "Guardian Angels". As we bid her farewell, we pray that the songs of the angels may accompany her on her journey into paradise.
The Sisters of St. Benedict thank the staff at Holy Family Home for their diligent and loving care for Sister Joan.
The Mass of Christian Burial will be celebrated at St. Benedict's Monastery Chapel on October 26 at 10:00 a.m. presided by Rev. Geoffrey Angeles. Interment will follow at the Monastery Cemetery. Due to current restrictions only invited guests will attend.
In lieu of flowers, donations may be made in Sister Joan's memory to St. Benedict's Foundation, Inc. at 225 Masters Ave., Winnipeg, MB R4A 2A1.