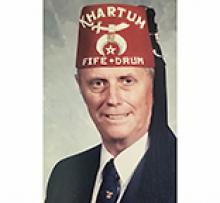 Following a brief stay at Victoria Hospital, with a full moon lighting the morning sky, Hilton McGregor (Mac) Wilson passed away peacefully on October 20, 2021, at the age of 92. Jean, Gail, and Don were at his side during this difficult period. Mac had experienced a long and wonderful life with many accomplishments and wonderful memories.
He was predeceased by his wife Elaine in 2007 and brothers, Gordon and James. He is survived by his three children, Jean (Glen) Williams, Gail (Wayne) Atamanchuk and Don (Debra) Wilson, and brother Robert (Bernice) Wilson. Mac was a very proud grandfather to his seven grandchildren, Ryley, Josh, Stephanie, Robyn, Scott, Danika and Makayla and ten great-grandchildren. He will also be lovingly remembered by his many nieces and nephews.
Mac was born and raised in Minnedosa, Manitoba where he started his career with CP Rail as an operator (in telegraphy) right after high school and later as a dispatcher in multiple small communities until his move to Kenora. There he met and married his wife, Elaine (nee Appel) Wilson in 1957. Mac and Elaine raised their three children in Kenora. He was an active part of the community participating in the Lake of the Woods Band, coaching and volunteering at Central Community Club and curling. In 1974 the family moved to Winnipeg where Mac completed his career in the CP Rail dispatch office.
After Mac's retirement in 1986, Mac and Elaine travelled the world including several destinations in Europe and Australia. They had 50 wonderful years together and his favourite photo of Elaine rested on the wall above his bed both in Winnipeg and at camp.
Mac began his Masonic service in Kenora in 1960, served in the officer's chairs to Worshipful Master, progressed through the York Rite and the Scottish Rite, and landed in the Shrine as a proud member of the Winnipeg Shrine Fife and Drum Band. Being a central figure in most organizations he served, Mac very much enjoyed the comradery and engagement with voluntary work. The Masons, Meals on Wheels, helping at Immanuel United Church with the fall dinners and cutting the grass on the church grounds, he was someone many counted on.
After acquiring a small island in Smugglers Cove on Lake of the Woods in 1956, Mac spent the next six decades building an incredible family gathering place. Family reunions became an annual event with Mac thoroughly enjoying the family games, food and fun.
Perpetually the optimist Mac had an adage or idiom to quote his friends and family when they came up against challenges; one such adage was "where there's a will there's a way". Every meal made for him was "the best one he ever had!" which included any sandwich and hospital food.
Hilton McGregor Wilson was a unique man. A natural leader, driven by principle, demonstrably altruistic and generous, and admired as a role model by many. His devoted friends and family will miss him deeply for his capacity to bring a lighter mood to any situation.
For the last several years, Mac made his home at Concordia Village where he developed many friendships and enjoyed the diverse community activities. A special thanks to all those at Concordia Village for creating such a special and safe place to live, particularly during Covid. Also, thanks to Dr. Adam and the staff at the 4th floor of Victoria Hospital who cared for Mac in such a respectful way and treated the family with heartfelt compassion.
There will be no formal service. Mac's wishes were to have a celebration of his life next summer.
In lieu of flowers, please consider donating to causes that meant a lot to him: Khartum Shrine Patient Transportation Fund www.canadahelps.org/en/charities/khartum-shrine-patient-transportation-fund/, Ducks Unlimited Canada at www.ducks.ca, Canadian Wildlife Federation www.cwf-fcf.org/en/ or a charity of your choice in his memory.