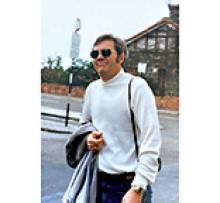 It is with deep sadness that we announce the passing of Carl Johannes Thorsteinson. On October 13, 2021, Carl returned to heaven to be with his loving wife, Gayle (Kolodie) Thorsteinson.
Carl was born in Riverton, Manitoba, on January 6, 1937, to Johann Thorsteinson and Valdina (Jonasson) Thorsteinson. Carl was raised in Gimli, MB and embraced his Icelandic heritage all throughout his life - he was a very proud Icelander! Carl was the oldest child with four sisters and he took his role of being their "big brother" very seriously, always making sure his sisters were loved and always taken care of. In return, his sisters Rosalie Severn, Tanis Carlow, Paula Curic and Penny Dzydz both adored and doted on him. Throughout his life, this never changed, whether it was his sisters, his wife Gayle, or in his last few years, his caregivers, who he lovingly referred to as "His Girls."
In 1955, Carl and his friends went to the local curling rink in Winnipeg Beach to check out the girls. As he walked into the rink, he saw the most beautiful young woman he had ever seen. Carl watched as she slid along the ice, yelling, "Sweep!! Hard!!" and it was love at first sight. He turned to his friends and said, "You see that girl? If any of you even look at her again, you are in trouble". In 1956, Carl married that beautiful woman Gayle, and they spent the next 58 years building the life they both had always dreamed of. Together, they had five sons - Randy (Kathleen), Terry (Cheryl), Robert, Gary (Corrine) and Kristjan (Karen); 17 grandchildren and six great-grandchildren.
Carl was an everlasting entrepreneur with limitless business ideas. In 1956 at 19 years old, Carl and Gayle moved to Edmonton, Alberta, to start their life together with hopes and dreams for a bright future. Carl began his career in sales at Canada Packers, McCormicks, and Imperial Oil. Then the perfect position became available at Greg Lund, a Recreational Vehicle Parts Distributor in Calgary. Carl had found the ideal opportunity in a new industry and got to know all of the manufacturers. In 1967 the family moved back to Winnipeg, MB as the new TravelAire Trailer dealer, Carlson Trailer Centre. From modest beginnings, he grew the company to 11 dealerships from Thunder Bay, ON to Saskatchewan, with Winnipeg being the Head Office. After ten years, he moved to Red Deer, AB, to become one of the owners of the Travelaire factory. In Red Deer in 1984, he started a new family business with Gayle in the Incentive Travel industry, which eventually included all five sons. Cascadia Motivation has taken the top achievers from over 200 corporations to over 95 countries in 37 years. Carl was passionate about travel, and this industry was perfect for him. He has travelled to over 130 countries, from Russia to China, Australia to South Africa, and everywhere in between. Travelling was his true calling.
The few days before Dad passed away, he was surrounded by family and loved ones, telling stories and reminiscing - one of his favourite things to do. The moment he passed on, he was with two of his granddaughters who held his hands and reassured him everything would work out and he could now rest. We find comfort in the fact that Dad is finally free from the mental and physical limitations that Alzheimer's disease causes.
It was the perfect way to say goodbye to an amazing man who had proved time and time again that he was indeed a true Icelandic Viking.
Our family extends our heartfelt appreciation to Dr. Josias Badenhorst for his genuine compassion and care over the years.
A private service will be held at the Riverton Cemetery on Saturday, October 23, 2021. There will be a Celebration of Life held in the summer of 2022 in honour of Carl.
Memorial donations can be made in the name of Carl Thorsteinson to the Riverton Cemetery, Box 165, Riverton, MB R0C 2R0 or the Alzheimer Society of Manitoba, 120 Donald Street, Winnipeg, MB R3C 4G2.

Expressions of condolence may be left at www.neilbardalinc.com

Carl, we will miss you with all our hearts...
Gotta Nott Elskan