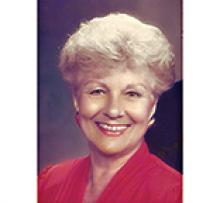 Helen, 96, of Richmond, BC, passed away peacefully on the evening of October 16, 2021, at the Richmond General Hospital, after a short stay.
Predeceased by her husband of 63 years, Peter in 2013, and her sister Mary Shewchuk of Kenora, ON and brother Henry of Winnipeg, MB. Survived by her five children: Reg (Sharon), Mary (Mike), Wendi, Teresa (Dusan) and Carole (Peter); her stepbrother Walter Swintak (Dianne); five grandchildren, and many nieces and nephews.
Helen was born in Brandon, MB to Ukrainian immigrants, Fred and Nellie Luddick. They lived a modest life in Dauphin, MB and grew up farming the land as her father made a living building homes, some of which are still standing today.
In her teens she became a great dancer and singer, often attending nightly dances during the war, where she'd often win jitterbug contests. She married Peter in 1950 and in 1960 they moved from Winnipeg to Richmond. Lucky to find incredible neighbours which helped with the initial home-sickness Mom soon joined the choir at St. Joseph the Worker parish where she became a pivotal member of the team which welcomed new parishioners. She would sing weekly with the choir until five years ago when this choir dispersed. They formed a "funeral" choir which sang at different churches in the Richmond area and Mom loved to joke that "People were dying to hear us sing".
Mom loved to entertain and it was not unusual for her to have two turkeys in her freezer at any given time. Mom always made room for one or more extra guests at the table and was known to host parties after midnight mass for choir members and friends.
Mom returned to work in the 1970s and enjoyed working at both Nishi's cannery as well as BC Packers. She thoroughly enjoyed the work and the long-lasting relationships she made there.
Mom and Dad downsized to a townhome in 2011 and enjoyed the great community and social events that Huntly Wynd offered. As always, they were once again blessed with exceptional neighbours.
The family wishes to thank Dr. Peter Quelch for his years of wonderful care and close friendship. To Dr. Justin Chan for looking after Mom in more recent years, and to the incredible nursing staff at the Richmond General Hospital. The dear and loving palliative care nurses and doctors who took the most amazing care of her in the last few days of her life, were very much appreciated.
A Christian Funeral Mass will be held Thursday, October 28, 2021 at 230 p.m., at St. Joseph the Worker Parish (4451 Williams Road, Richmond, BC)
We ask that in lieu of flowers you donate to a charity of your choice in our Mom's honour.