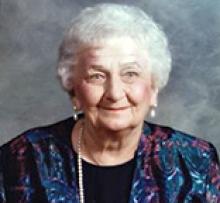 It is with heavy hearts we announce the passing of Josephine Mary Sohor at the age of 97 at Fred Douglas Lodge.
Josephine was predeceased by her parents, John and Mary Miluch, her beloved husband and soulmate of 68 years, Emil in 2017, her sister Annie in 1919, her brother Julius in 1936, her son-in-law Lubomyr James Manastersky, her sisters-in-law, Mary Sohor and Yvonne Romanyshyn (Bill), as well as her cousins, Mary Lusky (Ed) and their son Eddie, and John Memrick (Olga) and their son Johnny.
Left to mourn the loss of Josephine are her beloved children, Emil John Sohor (Sandi) and her daughter Marilyn Josephine Manastersky and her brother-in-law Stephen Sohor, as well as many nieces, nephews, extended family members and friends.
Josephine was born and raised in Winnipeg. She attended Faraday School and Isaac Newton High School. As Josephine believed in education for both boys and girls, she went on to Success Business College, graduated with Honours as a Secretary. She worked for a number of private companies until she secured a position with the Royal Canadian Mounted Police at their Winnipeg Headquarters.
When Josephine and Emil married in 1948, she had to leave her position as was the custom at the time. She stayed at home and looked after aged parents until they passed away. During this period of time Josephine supported her husband Emil, who returned to school and became an Electrical Draftsman.
Also, during the time Josephine was at home, Emil and Josephine had two children, Marilyn born in 1950 and in 1955 Emil John. During this period of time Josephine worked for civic, provincial and federal elections either as a clerk or a Deputy Returning Officer. She also loved to read, do crossword puzzles, knit, cross-stitch and always listened to music. Josephine also loved to dance and would never pass up an opportunity to party where dancing and music were involved.
After Josephine's parents passed away and her children were in school all day, she went back to work, first part-time, then full-time for the lawyer Mary Wawrako and then later for Wawrako and Ogoranko law firm. When the firm downsized, she needed to secure alternate employment. It did not take long before she secured a position with the City of Winnipeg, City Clerks Department in June 1975, taking minutes in short-hand and then transcribing and typing the minutes for different City Council meetings. She loved working for the City of Winnipeg, found the work to be interesting, and met many influential people and knew what was happening in Winnipeg. She retired in June 1990 after 15 years of service.
Josephine had been socially active during her whole adult life and this was not different in her retirement. She was an active member of the City of Winnipeg Retirees Association and participated in their activities. She was a member of The Catholic Women's League (CWL) at St. John Cantius Church from 1953 until the day she passed. She was also a member of C.P.A.C. (Canadian Polish Athletic Club) and later joined the CPAC Seniors. She also belonged to New Horizons, Ukrainian Senior Citizens Club at Blessed Virgin Mary Church.
Josephine also loved to travel with her husband to many places in the United States, Las Vegas, Branson, Texas and many other cities. Josephine and Emil also supported the C.N.I.B. (Canadian National Institute for the Blind) as both had visual disabilities.
The most important thing in Josephine's life was her family. She was immensely supportive of her husband and children and proud of all of their accomplishments. She found pleasure in all family and holiday celebrations. She was honest and opinionated with her "tell it like it is" attitude, spoke her mind and never hid her feelings. She believed in education and service oriented employment.
Josephine was at home with help from her daughter and home care and remained at home as long as possible. Two years ago she moved to Fred Douglas Lodge where she could receive 24/7 nursing care.
The family would like to thank all of the home care workers who assisted Josephine to live at home and to all of the staff at Fred Douglas Lodge for their compassionate, respectful and dignified care.
A special thank you to cousin Gerald Roman and his wife Rosemarie for their unwavering support throughout the years.
We take comfort in knowing Mom is with Dad. He was probably waiting for her, so she could have the first dance with him.
We love you Mom, miss you already and will never forget you. Until we meet again.
If friends so desire, donations may be made to a charity of their choice.
Mass of Christian Burial will be celebrated on Friday, October 29, 2021 at 10:00 a.m. with viewing at 9:30 a.m. at St. John Cantius Roman Catholic Church, 846 Burrows Avenue with Rev. Fr. Yolando Gammallo officiating. Interment to follow at St. Mary's Cemetery, 506 Osborne Street.
Pallbearers will be Gerald Roman, Harold Romanyshyn, Richard Sohor, Gordon Sohor, David Sohor and Mark Waddell.
A reception will follow at Cropo Funeral Chapel, 1442 Main St. following the interment.
As per Covid restrictions, all attendees must be masked.