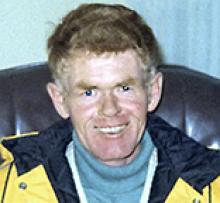 Surrounded by love, Ralph (Red) Magnusson passed away on October 19, 2021.
Remaining to forever cherish his memory are his wife of 63 years, Connie (nee Benediktson) and his family.
Red was born in Riverton on July 9, 1931 and moved to Gimli as a young boy. His working life started early, working with his father and fishing on Lake Winnipeg and Great Slave Lake. He worked for the Town of Gimli, Johnson Memorial Hospital and had several small businesses including Red's Billiards, and Red's Landscaping.
Red was a natural athlete and a fierce competitor who excelled at all sports, including baseball, golf, billiards, curling, and especially hockey. His love for the game saw him playing for many years, and then coaching Bantam, Midget, and Gimli Wolves hockey. Noted accomplishments included a seven-goal game as a junior player and coaching several successful and winning teams. He was honoured to be invited to be part of the coaching team for an international exhibition game against Russia in the 1970s. As the Coach, he had the strong support of his family, sporting their Coach's Coach (Connie), and Coach's Kid hockey jackets. Many happy hours were spent on the road and in the arenas.
Red served as a Councilor for the Town of Gimli and as an Evergreen School Board trustee. He was also involved in the Icelandic Festival of Manitoba, overseeing many sporting events.
He and Connie followed the World Curling event for two decades, travelling nationally and internationally to watch games and explore Europe. Cruising became a new interest, and more recently trips to the casino, where he occasionally enjoyed some luck. Red and Connie shared a love of dancing at country dances, Tombolas, and the Old Timers Dance. He was a real story teller, and he had a great memory for details, or so he assured us.
Red lived proudly in sobriety and made many friends on that journey. He also persevered through many health challenges over the years, always bouncing back from setbacks. He was proud to have reached 90 years of age.
Red and Connie were high school sweethearts, who married in 1957. Family soon followed. He was a wonderful Dad and doting Afi and Lang Afi. Favourite family activities included camping, boating, fishing, Sunday drives, and visits to the farm. The Magnusson family traditions are many and varied - from holiday gatherings, special menus, September Long at LV, and our spot to watch the Festival parade.
He was predeceased by his parents, Haraldur and Ingibjorg; sisters, Grace, Marjorie and Vivienne, as well as other family and friends. He will be lovingly remembered by his wife Connie; daughters, Valerie Gendron (Rob), Jo-Ann Welham (Adrian), Marilyn Valgardson (Jeff), and Laurel Biluk (Melvin); grandchildren, Vanessa (Travis), Dayna, Rhys, Carly, Andrew (Carrie), Luke (Shannon), Madison, and Megan; and great-grandchildren, Brayden, Dakota, Emily, Callum, and Isla, as well cousins, nieces and nephews.
Private interment to be held at a later date.
Donations can be made in his memory to a charity of your choice.

Expressions of condolence may be left at
www.neilbardalinc.com

Goda nott Elskan, we will love you forever.