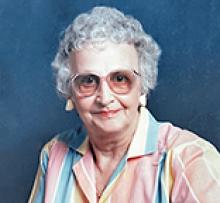 It is with deep sadness that we announce the passing of Kathleen, with her daughters by her side, on October 20, 2021, at West Park Manor at the age of 97 years.
She will be lovingly remembered by children, Sandra, Ron (Rena), Marlaine (Al), Brendalee (Rick) and Valerie Lynn (Paul), grandchildren, Trent, Warren, Walter (Michelle), Ron Jr., BJ, Kathaleen, Ron, Carrie, Lee (Paul) and Bob, as well as 21 great-grandchildren, numerous nieces and nephew and sister-in-law Velma.
Kathleen was predeceased by her parents, George and Nelly, sister Patricia, brother Jim, son-in-law Bryan, grandson Grant, great-granddaughter Ainsley, and nieces, Lisa and Mary.
Kathleen was born in West Kildonan and she spent time in Hamilton and Kamloops before returning to Winnipeg. She wore many hats that included membership in the Red Hat Society, she modelled for the The Bay store, worked at Sears and contributed greatly to Lion's Housing Centre programs. President of the Ellice Place Resident's Council.
She loved playing the pony's and owned race horses at Assiniboia Downs. At 67 years of age, she graduated from the Seniors Leadership Program at the University of Manitoba.
She was a huge fan of football, loved to lawn bowl, play cards and having a sip of Bailey's once in awhile.
A Service of Remembrance will be held at a later date.
Thank you to the staff at West Park Manor for the care given to our mother, especially our "sister" Lovie. Special thanks to Rick who went above and beyond to bring laughter and joy to Mom's life at West Park Manor. Thank you to Jean who spent many hours talking with Mom over the years and bringing her chocolate chip muffins and tea.
In lieu of flowers, donations may be made to the CNIB or a charity of your choice.