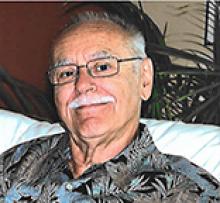 Peacefully on October 29, 2021, Joseph Everton passed away from esophageal cancer at Grace Hospice, at the age of 78.
He will be lovingly remembered by his wife Dorothy; children, Warren (Annika) and Jody; grandchildren, Lyndon (Danisha), Madeleine, Nicholas, Daniel, and great grandson Kase. He will also be missed by his sisters, Susan and Lisa, brother Jim (Susan); sisters-in-law, Deb Everton, Judy Gayda, brother-in-law Lawrence Trush (Carole), and extended family and friends. He was predeceased by his parents, Arthur and Genevieve, brothers, Ferdy, Mark, Andrew, and sister Alice.
Joe grew up in Transcona and was the second of eight children. Summers were spent at their family cottage in Ottermere, and later at Tarryall Resort, Catherine Lake, Ontario. Joe and Dorothy met in 1961 and were married for 58 years. His work career spanned over 40 years from Canadian National Railway, Ontario Hydro, Hotel Owner/Manager and Grace Hospital. Joe, Dorothy and children moved from Winnipeg in 1969 and lived in Kenora, Thunder Bay, Leaf Rapids, returning to Winnipeg in 1982. He was a loving husband, father, grandfather and great-grandfather. He was proud of his children and grandchildren's talents and accomplishments and supported whatever endeavours they chose to pursue.
Joe was an avid reader, making him an interesting conversationalist on all things related to nature, science, history, politics and more. He had a vast array of knowledge and experience. He cherished the outdoors and in his travels looked for opportunities to be among the rivers, lakes and trees. Beaudry Park was his spiritual sanctuary, witnessing the infinite expressions of nature and wild life. He had a special cottonwood tree that he would stand beside, put his hand on, and have a quiet moment in the tranquility of the park.
Joe was a member of Anavets 283, and played in a snooker league and golfed with his team. He enjoyed kayaking, fishing, biking, skiing, riding his motorcycle and getting together with family and friends. One of his greatest accomplishments was getting his pilots license in 1980. After retirement he volunteered at Siloam Mission for 10 years.
Joe and Dorothy travelled from coast to coast in Canada and in the United States. Memorable and milestone birthdays and anniversaries were spent in Hawaii, Alaska, Palm Springs, Jamaica, England, Wales, and Scotland. They enjoyed winter and summer vacations with their children and grandchildren in the Okanagan, Vancouver, and Victoria. A proud moment for Joe was catching a 43 pound salmon on a fishing trip to Vancouver Island. We are grateful for the memories and experiences we shared together.
Joe faced his cancer diagnosis with courage, dignity and grace. During the past few months, he had patience, strength and endurance in the midst of his discomfort.
The family wishes to extend their gratitude to Dr. E. Bykova, Dr J. Paul, Dr A. Leylek, Dr G. Buduhan, medical staff at CancerCare, the Palliative care team, Riverview Heath Centre, and Grace Hospice for their compassionate care and support.
A private family Celebration of Life will be held.