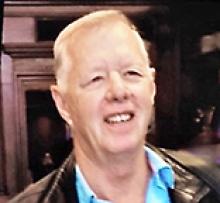 It is with our deepest sorrow that we announce the death of our beloved Husband, Father and Grandfather, James Dmytrow. James passed away on October 25, 2021, at the age of 71, peacefully, at his home, surrounded by his family. He fought his relentless battle with kidney cancer for over 18 years. He persevered through every obstacle and challenge with courage, optimism, and hope.
James will be deeply missed by his wife of 49 years, Fern, his daughter Cory (Jared) Campbell, son Adam (Olivia) Dmytrow and his precious granddaughter, Amelia Dmytrow. He leaves behind his brother Leonard (Lorraine) Dmytrow and his sisters, Shirley (Glen) Kurian, Cathy (Lance) Honke, and Delores (Kevin) Franzen, brothers and sisters-in-law, Myrna (Rae) Corder, Bob (Helen) Trowsdale, and numerous nieces and nephews. He was predeceased by his parents, Peter and Anne Dmytrow, his brother Joseph Brian (in infancy) and in-laws, Chesley and Sadie Trowsdale.
James was born in Winnipeg. During his childhood, the family lived in the city and in Prawda, MB. In 1972, he married his soulmate and best friend Fern (Trowsdale). He worked for the CN Railway in the signal department for seven years. After the birth of their daughter, James and Fern decided to settle in Hadashville and make a home there. It was at that time James became business partners with his father in the logging and lumber industry. In 1984, James purchased his own sawmill and equipment and started up his own company, Dmytrow Forest Products Ltd., which he operated in Hadashville. In 1994, Fern and James relocated to East Selkirk where they've resided ever since. During these later years, James diversified his business, shifting into raw wood products of pulp and firewood. Although logging was his passion in life, due to his health issues James could no longer work at the pace he was accustomed to, and in 2009, he decided to sell his business and retire. After his retirement, you would rarely catch James sitting idle or relaxing. That wasn't his style. He remained busy, doing landscaping and mechanical repairs for people he met in the area, who fast became his good friends. James spent endless hours working in his shop. In the past year his latest project was a full restoration of a 1926 Ford Model T. The antique car turned out amazing and we are all so proud.
James and Fern enjoyed travelling and went on many trips throughout Canada and the United States. They would often plan trips to places they wanted to visit and would take in a Springsteen concert whenever they could. They both fondly remembered their trip of a lifetime to Europe with their good friends, Paul and Judy, where they made many cherished memories.
James found joy in many things - camping, boating, and fishing with family and friends when the kids were younger. He enjoyed his dogs, curling, and gardening; growing more veggies than they knew what to do with. He would end up giving much of his crop away to friends and neighbours. In the past few years, he dabbled in recreating his mother's dill pickles, and would make his rendition of rhubarb and wild plum jam.
James truly enjoyed being a grandpa and was so happy when his granddaughter Amelia arrived. Whenever she came to visit, she'd ask to go out to "Grandpa's Sop" to see what he was up to. She would ask to sit in one of his cars and pretend to drive, while he worked on it.
James was genuine, hardworking, compassionate, and uncomplicated. Never one to mince his words, he said what he thought. He was remarkable in his own way and made a difference in the lives of the people who knew him well. He was proud of his children, and their successes. James lived his life with unwavering determination, courage, and confidence to accomplish his purpose. At the end of his life, he had few regrets. He will be lovingly remembered and deeply missed by his friends and family. We will honour and cherish his memory forever.
Cremation has taken place and a private graveside service will be held at a future date.
Special thanks to Dr. P. Czaykowski, Dr. D. Drackenberg, and Dr. G. Balko for their expertise and compassion throughout James's long fought journey.