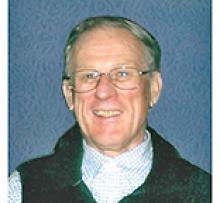 It is with sorrow that we announce the passing of Murray T. Brooks at the age of 89, at Deer Lodge Centre on October 20, 2021. We take comfort in the belief that he is now reunited with his beloved wife, Joyce, and dearly loved daughter, Corri.
Murray is survived by his son Kevin (Theresa) from Yellowknife, NT; sister Lorna Bilokury of Winnipeg, MB. He also leaves behind to mourn, son-in-law Alan (Susan) from Beausejour, MB; grandchildren, Julianna, Danny, Katrina (Grant), Iain, Paulina Jon (Destiny) and Nicholas; brothers-in-law, Garry (Jeanette) and Danny (Lynne), sister-in-law Florence Anderson; and numerous nieces, nephews, extended family and friends.
Murray was predeceased by his loving wife Joyce on August 17, 2021, and daughter Corri; parents, Harold and Margaret Brooks; brother Carl (Doreen) Brooks, as well as brothers-in-law, Omar Bilokury, and George (Lina) Henderson, Don (Bert) Henderson, David Henderson, and Wayne Anderson.
Murray was born in Winnipeg's West-End and moved to sunny St. James at age nine. He attended Assiniboine and Linwood Schools. Upon graduation in 1950 he joined TCA (Trans Canada Airlines) in the Stores Department at the Winnipeg Maintenance Base. He enjoyed the work and met many other young people who had been hired by the airline. Murray met Joyce Henderson through mutual friends in 1955 and they were married by 1958. In 1961, TCA was transferring many employees to Montreal and Murray and Joyce decided to accept a transfer to improve his career opportunities. Their family grew - Corri was born in 1962 and Kevin in 1963.
Murray enrolled in Sir George Williams University and obtained a purchasing management designation. It was a busy and exciting time to be working for the airline as TCA was growing and expanding rapidly. The company became Air Canada in 1965 and rapidly increased their fleet with the introduction of jet service. Murray would travel extensively to the US and Europe to negotiate purchase agreements. His specialties were the interior fittings for new airplanes (seats, kitchen galleys and overhead storage units). Murray worked for Air Canada for over 37 years.
Murray loved sports on the ice. He was an avid curler and coached his son's hockey team for many years. He loved the Blue Bombers and the Jets, but his greatest passion was genealogy. He spent many hours researching family history and had many trips to Ontario to further expand his knowledge. Much of the information he gathered regarding the Brooks Family Tree was sent to the Family History Centre in Salt Lake City for future Genealogists to reference and build upon.
Murray was also a skilled "Handyman" who took on the finishing of two basements in the homes they purchased in Montreal and Winnipeg. No project seemed to be out of his reach. Murray loved to have the best lawn in the neighbourhood and would devote hours to keep it in pristine condition. Often you would find him on hands and knees searching for poplar seedlings or that elusive weed that chose to infect his lawn. He also had many battles with the squirrels that lived around the house in Winnipeg and devoted numerous hours to see how he could prevent them from getting access to the bird feeders. It provided so much enjoyment to Joyce to see these amazing little critters beat Murray's efforts.
A sincere thank you to Danny and Lynne Henderson for the continued support they gave for Murray's care. Your efforts will never be forgotten. The staff at Deer Lodge Centre were truly amazing, the care and the compassion they showed Murray during his long struggle with Alzheimer's was remarkable.
A graveside service and interment will take place on November 10, 2021 at 11:00 a.m. at Chapel Lawn Cemetery (Garden of the Four Prophets), 4000 Portage Avenue, Winnipeg, Manitoba. All are welcome to attend.
In lieu of flowers, donations can be made to the Deer Lodge Centre or a charity of your choice.