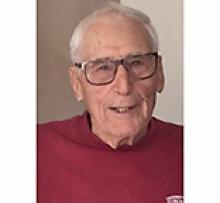 With deep sadness, the family of Dennis Roger Coté announce his passing on Sunday, October 31, 2021.
Dennis lived his entire life in Dauphin, Manitoba. He was born at the Dauphin Hospital and died at the Dauphin Personal Care Home. He grew up on the farm just north-east of Dauphin and, in his late teens, spent two years in the army. He joined the CN as a trainman in 1949 and retired as a conductor in 1983. He and his wife, Irene, married in 1949 and raised five children in Dauphin. Both valued family life above all else; nothing pleased Dennis more than to see his family together, laughing and loving. He knew the value of family and friends and sought to attend all celebrations, marriages and funerals.
Driven by a strong work ethic and a love of the outdoors, Dennis was a successful farmer, hunter, gardener, CN worker and Dauphin citizen. He was a true provider, making sure his family was well loved, sheltered and fed (moose meat, potatoes and, always, saskatoons). He was an engaged and active citizen of Dauphin and member of St. Viator's Roman Catholic Church, the Knights of Columbus and the Legion. Dennis greatly appreciated community and comradery and made lifelong friends wherever he was - working, playing or travelling.
Dennis was an accomplished golfer, a master card player (bridge and cribbage in particular) and a highly sought after dance partner. In addition to golf and bridge, he and Irene shared a love of travelling and of summers at the cottage. Together, they visited, always with an eye out for golf courses, Jamaica, Cuba and Hawaii and spent many winters in Mesa, Arizona. Summers were spent at their Dauphin Lake cottage, enjoying the quiet, peaceful beauty. After Irene's death in 2006, Dennis spent several winters in southern Texas with his buddy Jim and continued to foster, during the summers, a strong community at the Lake.
Left to mourn and yet to cherish so many loving memories are his children, Carolyn (Heather), Rick (Kathryn), Brent, Michael (Connie), and Rob (Darlene), his grandchildren, Marc (Tatyana), Erin, Dyan (Les), Chris (Lori-Ann), Carmen (Clay), Steven (Melanie), Jarret, Dustin, Nicole (Matt), Alex (Mila), Dianne and his great-grandchildren, Amelia, Connor and Nolan, Caitlin and Jacob, Heidi, and Paul. He will be sadly missed by his dear friend, Blanche Lafebvre, and the many, many friends and relatives who loved him dearly, especially Linda and Mike Zazuliak, Bill and Elsie Speers, his daughter-in-law Wendy of Brandon and his nieces, Pat, Marie and Judi.
Dennis was predeceased by his parents, his seven siblings and his beloved wife of 57 years, Irene (2006).
Thanks to all who cared for him so well: Dr. Penrose and Dr. Mathison; the friendly, caring staff at Happy Haven and, in the last month, those at Dauphin Personal Care Home.
As his legacy, he leaves an extensive, loving community: his children, grandchildren, great-grandchildren, extended family, local dear friends, a cottage/golf community, a profusion of friends across North America, and just about anyone who crossed his path.
As a son, husband, father, and friend, Dennis lived a full life governed by wisdom, integrity, courage, and generosity. The world is emptier without him but richer for his presence in our lives.
A funeral service followed by a light lunch will be held at St. Viator's Roman Catholic Church on Tuesday, November 9 at 2:00 p.m.
Note: COVID restrictions apply.
The service will be livestreamed at service time. Please visit: