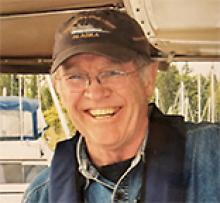 With great sadness we announce the passing of Jack Carthy on October 27, 2021.
Jack was born July 5, 1942 in Winnipeg, Manitoba. He graduated from the University of Manitoba with an Engineering Degree, and went on to complete his MBA at UBC. He began his career as a salesman for Finning with posts first in Vancouver and Dawson Creek. He helped grow the company and in 1995 Jack relocated to Chile as a senior executive with Finning International. His last post was in the UK before retiring in 2003.
Jack was an avid boater spending all of his spare time with his family and wife Roberta on the Pacific Ocean waters.
Jack was the dearly beloved spouse of Roberta Carthy (nee Weir), father of Jason (Christi) Carthy, Monica (Nicholas) Read, Heather (Bryan) Stephenson and grandfather to Piper, Charlotte, Gabriel Read and Sophia, Brandon, and Nathan Stephenson. He will be greatly missed.

"We get no choice. If we love, we grieve."
- Thomas Lynch

A Funeral Mass will be held November 9, 2021 at 11:00 a.m. at St. Anthony's Catholic Church.
A Celebration of Life will follow at a later date.
In lieu of flowers, donations may be made to the North Shore Hospice.