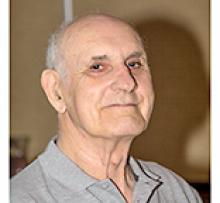 It is with tremendous sadness that we announce the passing of Jack Black, a special man who will live forever in the hearts and minds of so many people who knew and loved him.
Given the name Henry John at birth in 1935 by his parents, William and Anne Black, he rarely if ever was called by those names. Forever he would become "Jack".
Who would have thought back then that Jack, one of seven siblings, from Stonewall, Manitoba would have made such an impact on so many over his remarkable 86-year journey? He was many things to many people. As a young boy, Jack was a "Gamer". Chasing pucks on frozen ponds, his hockey dreams took him from local stardom to junior hockey with the famed Flin Flon Bombers and even to a try-out with the New York Rangers. Eventually big dreams gave way to bad knees, and he unfortunately was forced to retire. Jack returned home and fell in love with his Bonnie and a love affair that lasted over 55 years, producing four boys, eleven grandchildren, hundreds of family get-togethers and countless priceless memories. Their lifelong house in Transcona became a second home for everyone that visited. Jack became the Director of Safety for Manitoba Highways, a career that spanned decades of travelling around Manitoba teaching proper safety skills and protocols to thousands of grateful government employees. A hero whose safety messages and practices through the years helped prevent accidents and in turn saved many lives. In 1990, he was invested as a Serving Brother into the "Order of St. John" and received a medal for his outstanding first aid work which was signed off by the Governor General of Canada. Jack was always ready to lend a hand to friends and family whenever needed. Attending to his kids' events and later in life taking care of his grandchildren were amongst his favourite things to do. A wanna be handyman who was meticulous with any tool in his hand. And Bonnie chuckling would often remind him that his two-day long project was heading into its second year. Still, no matter how long it took, Jack got it done and it always worked better than before. Jack was a "Talker" and a "Listener". This man loved to tell stories. And loved to listen to your stories. And people loved to be around him. Jack was one of a kind. His life was as colourful as the mismatched outfits he would wear golfing. No golf shirt was too bright, no shorts were too wild, and his almost knee-high black socks became his trademark. He didn't care about appearances. Jack cared about people. Those he worked with, those he talked and laughed with, those like his neighbours who adored him, those who came to visit, those who were patient and kind, those he watched Coronation Street with, those who loved his famous French Toast, those he met at Dal's Restaurant, those on the 9th hole at Harbour View who couldn't believe what he was wearing, and mostly those who were closest to his heart. His family! His Bonnie who he is reunited with in a special place and now can dance together again. His pride and joy - his four boys - Rod (Nancy), Derrick (Judy), Sean (Laura) and Ryan (Jennifer) and his precious grandkids, Erika, Jessica, Braeden, Tyler, Brody, Nicole, Jesse, Sienna, Nicklas, Aiden, and Beckham. Our hearts are broken right now but we are all here because you were here and made all our lives so much better.

Thank you "Black Jack", "Pops" "Grandpa Jack", "Dad". May you Rest in Peace.
Forever in our Hearts. Forever Jack.


A gathering to celebrate Jack's life will be held at a later date.