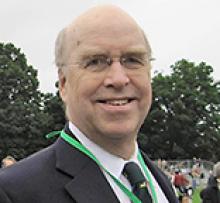 It is with great sadness that we announce Augustus (Gus) Searle Leach passed away unexpectedly, but painlessly, at the St. Boniface Hospital, Winnipeg, surrounded by family, on November 1, 2021. Born in Winnipeg, Canada in 1939, Gus was the eldest child of A. Searle Leach and Frances (Gilman) Leach.
Gus is survived by his much loved wife of 59 years, Gail; fabulous Dad of Barbara Gail Leach-Walters (Simon Walters), Tannis Allman Leach (Gordon Griffin), and Margo Gilman Leach Vergotis (Gerasimos Vergotis); and cherished 'Tapa' of his four grandchildren, Frances Paige Nuttall, Augusta Samantha Leach Walters, Maria Phoebe Vergotis, and Aikaterini Frances Vergotis. Gus is also survived by his brother Larry Leach (Dale); sister Linda Radcliffe (Michael); and sister-in-law Johanne Leach. Many nieces and nephews referred to him as Uncle Gus and he loved spending time with them all - David Leach (Susan), Julie Griffiths (Dylan), Andrea Regan (Wes), Sara Leach (Dwayne Hepditch), Heather Sage (Doug), Timothy Radcliffe (Stefanie), and Christopher Radcliffe (Kelly). Gus was predeceased by his parents, A. Searle and Frances Leach, and his brothers, Gilman Leach and Norman Leach.
Gus was born and raised in Winnipeg. He attended Shattuck-St. Mary's (Faribault, Minnesota) for high school - class of 1956; Dartmouth College (Hanover, New Hampshire) - class of 1960; and University of Western Ontario (London, Ontario) - MBA class of 1962. Gus was a proud alumnus of each school and introduced our family to many of his lifelong friends as they stayed in touch over the years.
Gus was also a proud Winnipegger. After a 30-year career with Federal Industries Ltd., Gus continued his involvement in business with various venture capital projects in Manitoba. He made continuous contributions to his community through his commitment to service and the arts. Before becoming a member of the Board of the National Art Gallery in Ottawa, Gus had a number of roles on both the Boards of the Winnipeg Art Gallery and the Manitoba Museum, including President of each. Gus demonstrated a keen interest in the direction of the City: he was a Director with the Winnipeg Blue Bombers for over 20 years, and the family's biggest Jets fan. Gus developed many lifelong friendships through his long-term memberships, including at the Manitoba Club, the St. Charles Country Club, and the Royal Lake of the Woods Yacht Club.
He travelled both Canada and the world far and wide. In retirement, many trips involved visiting his daughters and grandchildren while they were living in some of the great cities of the world. While Winnipeg might not have been a popular draw as a family gathering spot, Lake of the Woods and Whistler proved to be fabulous locations for his family to get together. Dad loved skiing and for over 50 years, he made it a winter sport that the whole family enjoys. As a volunteer Mountain Host for Whistler Blackcomb, including the 2010 Vancouver Olympics, Dad used to say he'd waited 40 years to be a 'ski bum', setting the best example for his grandchildren.
Gus spent every summer from a young age at Lake of the Woods and valued seeing four generations pass through its islands. Sailing was a passion and through Royal Lake of the Woods Yacht Club, Gus will be remembered by many friends. Luff and the annual LOWISA regatta were always a summer highlight - and that enthusiasm has trickled down through three generations.
Gus had a great sense of humour and was always up for a laugh and an adventure. He showed genuine interest in what his friends and family were up to and would regularly pepper them with questions. He was a loyal friend - his weekly golf group at the St. Charles Country Club became a regular highlight of his routine. In addition, combining golf with travel, Gus was in his element helping with the logistics and the role of 'score keeper' on annual trips with the boys. Not to be forgotten... the Baker's Dozen - a 13-man dinner club that began in the 1960s (with only one of them knowing how to cook - not Gus) and still has regular dinners to this day.
His core values of working hard, being accountable, ethical, and true to yourself have been instilled in both his children and grandchildren, and all have benefited greatly from his advice. Best of all, he loved and was loved by his family. He will be missed terribly.
There will be a memorial service in Winnipeg at 2:30 p.m. on Friday, November 12, 2021, at St. George's Anglican Church - Crescentwood (168 Wilton Street at Grosvenor). A livestream will be available through the Church website link: https://www.stgeorges.mb.ca/live/ The family welcomes you to join them for both the service and/or the reception at the Manitoba Club (194 Broadway) at 4:00 p.m. where we'll raise a glass and toast a life well lived. Respectfully, all attendees will please be double vaccinated.