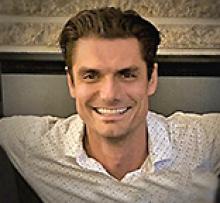 With broken hearts, but deeply loving spirits, family and friends grieve the passing of Zachary John Wolff of Winnipeg.
Zachary was known to all as a devoted husband, daddy, son, brother, friend, colleague. Always with a ready smile, a sparkle in his eyes and a "can-do, will-do" spirit, he was a man who made important differences to all he touched.
Zachary was taken from us suddenly at age 35 on October 28, 2021, while in the U.S. on business.
He is loved and will be loved forever, mourned now by his wife, Shea, beautiful son Jasper, his mother Kristal, sisters, Julia and Natalie, in-laws, Patti and Jerry, Shea's sister Maggie and Lisa, Zach's maternal grandmother Lily Slobod, his paternal Uncle Ted and Aunt Christel, and many other family members and friends.
Zachary accomplished so much in his short life that can't be captured here. He was a professional engineer and earned his MBA while working full-time with Boeing. What began as an academic project became a novel bio-science-based technology firm he founded in Winnipeg. He was its CEO for several years, working around the world. His entrepreneurial drive was widely celebrated. Most recently he put his heart and soul into Emergent BioSolutions in Winnipeg and Baltimore.
Zach's insatiable intellect and joyful spirit brought him to love music, adventure, solving problems, studying, current affairs, the natural and academic world, all that life had to offer. Family was always at the center of his soul. He was known and loved for his humour, compassion, verve, and beautiful, caring heart.
Zach was a Renaissance man, a combination of intellect and physical strength. He was as comfortable building things as designing them, managing big projects or building Lego with his cherished son. He always reached for the sky; now his is one of the brightest stars to be seen when our gaze turns upward.
Proud of his roots as a son of Alberta, he is gone to be with his departed father, Horst Wolff. But he will be with us forever, missed and loved all the days that forever holds.
A phrase Zach used a lot, words that meant much to him, words he had tattooed on himself, seem apt now: 'So it goes..." You are so loved, Zach.
Arrangements in care of Mosaic Funeral Services (204) 275-5555