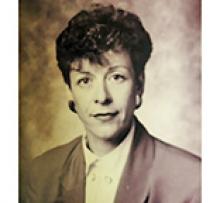 It is with profound sadness that we share the passing of Bonnie, beloved wife and partner of Arnie Young. She passed away peacefully at 'Moog and Friends Hospice House' in Penticton. Bonnie was 73. Bonnie was born in Russell and was raised on the family farm in Inglis, Manitoba.
She was a fierce learner, a Psychologist who backed every ounce of intellect with compassion! Directly after high school she completed a Bachelor of Arts at the University of Brandon. She then studied at University of Manitoba where she received her Certificate in Education in 1974.
Always up for a challenge, Bonnie joined CUSO and taught in Tanzania for three years. When she returned to Canada, Bonnie secured a job as school counsellor at Margaret Barbour Collegiate Institute in The Pas, Manitoba. It was in this small town that Bonnie met her future husband. Bonnie and Arnie (affectionately referred to as 'Barnie') connected through curling and dance! They were married in Russell on July 23, 1977. This began their 44 year journey of deep devotion and respect for each other.
Bonnie's thirst for knowledge continued. She was inducted into membership in the Alberta Teachers' Association in 1978, completed a Bachelor of Education in 1980, a Masters of Education in 1985. In 1987, after finishing all requirements of the Psychology Profession Art of the Province of Alberta, Bonnie received her Certificate of Registration as a Chartered Psychologist. Bonnie took her responsibility as a Psychologist seriously. She effectively guided countless people professionally and personally throughout her career.
Bonnie and Arnie retired to Peachland in 2010. In retirement, Bonnie volunteered at 'Now Canada Society' providing counselling to women who experienced addictions, abuse, sexual exploitation and mental health challenges. She also volunteered at the Parrot Island Sanctuary in Peachland.
Bonnie is survived by husband Arnie Young, brother Rick Keay; stepdaughters, Kim Young (Ken), Shelley Young (Eric), and Kelly Scott (David); grandchildren, Courtenay Mayes, David Mayes (Krista), Daniel Scott (Angie), Brenden Scott (Zoey), and Carter Scott; niece Britni Keay (Justin), nephew Reese Keay (Jessica), great-nephew Kade Keay, and great-granddaughter Macie Grace Mayes.
Bonnie was predeceased by her parents, Bill and Alice Keay of the Keay farm in Inglis, Manitoba.
We could never overstate our love and respect for Bonnie and we would give anything to share another moment with her. When we lose someone we love, we must learn, not to live without them;but, to live with the love they left behind.
A Celebration of Life will be announced at a later date.
Please consider honouring Bonnie's legacy by donating to 'Now Canada Society' (Kelowna), Doctors without Borders, Operation Smile, Parrot Island sanctuary (Peachland) or 'Moog and Friends Hospice House' (Penticton).