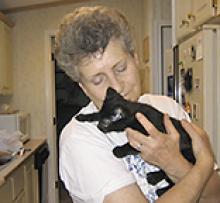 Born Sheila Jacobson in Winnipeg, Manitoba, to Elizabeth and Maurice Jacobson, Sheila was the youngest of three siblings of first generation Canadians born to Jewish immigrant parents from Poland and the Belarus. She developed a lifelong love of animals becoming known for her skills in small animal husbandry and her incredible range of knowledge in domestic pet care. She cared for all life (human and otherwise), and her family, volunteer work, and gardening brought her great joy in life.
She went to St. John's High School in Winnipeg, where she met, dated and married her husband, Lester Sherwin Zevit. They had their children, Shawn and Pamela soon after marrying. Sheila was part of the generation of women in the 1950s and 1960s who began entering the workforce once their young children were of school age.
In 1970, Sheila and Les moved to Toronto. This began a new phase of life. Except for a one-year foray in Sydney, Australia in 1973, Toronto was a place where Sheila cultured many lifelong friendships, and became involved with Hadassah, and other volunteer opportunities. After coming back from Australia, Sheila joined Les working at Chas Abel photo as well as their growing private business running a "Dickie Dee" ice-cream franchise.
In 1978, Les received an opportunity to head Chas Abel's western Canada plant in Calgary. Sheila, Les and daughter Pamela moved to Alberta while son Shawn stayed in Toronto to attend university. In Calgary Sheila began what became a lifelong career working with animals, working as a receptionist at a veterinary clinic, which she continued until she and Les followed their daughter to British Columbia, moving to Victoria on southeast Vancouver Island in 1993. Sheila and Les eventually settled in Central Saanich, where both lived until their deaths. In BC, she continued her passion for working with animals through a position with "Pets West" where she worked for over 20 years, and well past retirement, mentoring many younger women at work (and in life), becoming a beloved second "mom" and "grandma" to many.
With an indomitable spirit she supported Les through cancer and then Alzheimer's until his death in July, 2020, even after being diagnosed in 2019, and courageously pushing through treatment for her own rare form of cancer. Initially given a few weeks to survive in May of 2020, she became one of the 40% of patients who responded positively to treatment. Entering stable remission in summer 2020, she used the gift of her extra time, even in a Covid-impacted world, to explore, with new freedom, some of her own interests. In late summer of 2021, the cancer began to spread. She entered palliative care in October 2021, where she remained until her death November 10. Sheila was tenacious, clear and disciplined about her health right to the end, having acted upon an assisted dying provision she put in place soon after being diagnosed.
She is survived by her children, Professional Biologist Pamela Zevit (Coquitlam, BC), Rabbi Shawn Zevit, daughter-in-law Rabbi Simcha Zevit (Philadelphia, PA), brother Max Jacobson (Burnaby, BC), nieces, nephews, cousins and hordes of friends and former colleagues, all who miss her dearly, feeling blessed for having been touched by her loving light.
She always had a clear image of where she was headed in this life and beyond, and we pray for her soul's ease of transition to the English cottage she always envisioned for herself, with the garden she is now planting alongside the many beloved pets she had over the decades.