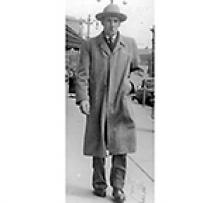 Peter passed away in his home on November 7, 2021 at the age of 91.
Peter was born in Reusel, Netherlands on October 2, 1930. As a young man he trained to be a carpenter and at the age of 21 he met the love of his life, Toni (Antonia), while working at a school where she was teaching. In 1954, fifteen months after Toni immigrated with her parents and siblings, Peter followed her to Canada. Peter and Toni were married during a prairie blizzard on November 5, 1955. After living for one year in St. Boniface, they bought their home in Charleswood where they raised their seven children. Peter and Toni's home was a hub of activity, a place where friends, neighbours, aunts, uncles, cousins, and grandchildren were always welcome (and well fed!). Peter entertained family and friends by playing the piano, accordion, and harmonica ... and by simply being Peter.
While their kids were young, Peter and Toni were a regular presence at the Roblin Park Community Centre where Peter helped build warm-up shacks, sharpen skates, clear ice, and enthusiastically offered side-line commentary during games. He coached youth soccer for many years. Peter was awarded an honorary membership by the Charleswood Legion because of his volunteerism. He played on the Legion's billiards and snooker leagues for forty-nine years and was a proud recipient of the Jack Sparrow Trophy for 1st place in 2008 to 2009.
Peter worked as a carpenter until his retirement. As a new immigrant, he took jobs all over the prairies. He later worked for Yager Construction and finally at the Department of National Defense, 17 Wing. Peter also helped many family members and friends build homes, garages, barns, and more.
Peter is preceded in death by Toni, his loving wife of 63 years; his parents, Jan and Helena; and his father and mother-in-law, Louis and Wilhelmina; his brothers and sisters, Simon, Mien, Jeanne, Riet, Anna, Cor, and Dora; grandson Wilfred; son-in-law Robert; daughter-in-law Sidney; sisters and brothers-in-law, Gerrit, Theo, Jan, Piet, Miet, Lena, Drina, Louis, Katie, Herman, John, Bill, Gisele, Georgette, Herb, Corrie, and Terry.
Peter is survived by his children, John, Louis (Sheila), Helene (Cassie), Ted, Rob, Laurie, and Don; daughter-in-law Marilyn; grandchildren, Leah, Nicole, Jade (Shane), Erin (Damian), Ryan, Justin, Megan (Tom), William, Breda (Erika) and Richard; great-grandchildren, Jenai, Julian, Storm, Axl and Chevy; brother Noud (Cor); brothers and sisters-in-law, Anne (Ted), Louis (Anne), Bill, Jan (Riek), and Truus.
Peter was a generous soul, and that generosity was returned to him by his family and friends. During the years of Toni's health decline and after her passing his family and friends were a constant source of support and comfort. During the long isolating months of the Covid lockdown Peter's sons sustained him by forming a Canasta-playing bubble around him (they also shopped and prepared meals!). His grandchildren brightened their Opa's days with distance visits and deliveries of homemade soups, meat pies, and muffins.
The family is immensely grateful that in his final months Covid restrictions shifted allowing Peter to reconnect with family and friends. His out-of-province daughters were able to visit. The family hosted a fabulous 91st birthday gathering where Peter made a foray onto the dance floor. Icing-on-the-cake, Peter went out on a winning streak! He and his partner trounced their Canasta opponents and he won four times at his final meat draw.
In keeping with Peter's wishes, cremation has taken place. A funeral service will be held at 11:00 a.m. on Monday, November 22 at Our Lady of Perpetual Help Church, 4588 Roblin Blvd., Winnipeg. The service will be followed immediately afterward by a Celebration of Life reception at the Anavets Assiniboia Unit No. 283, 3584 Portage Avenue, Winnipeg. Proof of vaccination and accompanying ID required at both locations.
In lieu of flowers, donations may be made to a charity of your choosing - or buy a round and raise a glass to Peter.