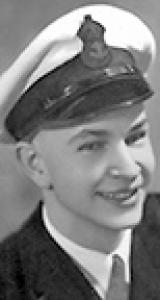 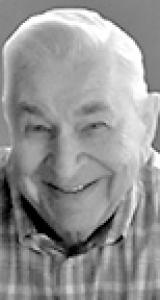 Gerald Ostry passed away peacefully, with his family by his side, at the Carewest Colonel Belcher Veterans Long Term Care Facility in Calgary, AB on Monday, October 25, 2021, at the age of 96 years.
Gerald was born, educated and lived his life in Winnipeg's North End. Gerald met the love of his life, Jenny, in Grade 6 at Lord Nelson School and they were ultimately wed on August 24, 1946. Their mutual love and respect for each other spanned 56 years of marriage. Gerald was always kind and willing to lend a helping hand to family and friends and was well known for his sense of humour. Gerald will always be remembered as a devoted husband, father, grandfather, and friend.
Gerald enlisted in the Navy in July 1944. When the Second World War ended, he began his studies, and successfully attained his Chartered Accountant designation back in Winnipeg. Gerald was self-employed most of his career, occupying an office in the Ukrainian Fraternal Society Building at McGregor and Magnus. His brother-in-law Ted and sister Mae worked with Gerald for a number of those years. Gerald finally laid down his pencil and unplugged his adding machine for good when approaching his 90s! In his later years, Gerald was very fortunate to have had a special relationship with Eugenie Hryshko, enjoying many laughs together.
Gerald was also an avid sports enthusiast. He was an accomplished ten-pin bowler who developed many lifelong friendships through the sport. We recall his joy when he finally bowled a 300 game after having been close with a 298 and 299. He was a season ticket holder of the Blue Bombers for 52 years, starting at Osborne Stadium, and of the Jets from the days in the WHA through to the NHL. As many can attest, Gerald would never turn down a game of Cribbage, Scrabble or a breakfast at Luda's.
Left to cherish his loving memory are his children, Gary (Debbie Hendsbee) and Maureen Luchsinger (Brian), and his grandchildren, Kathleen, Michael, Diane, and Alison. He is also survived by his daughter-in-law Anne and half-sister Yvonne Wilson of Toronto. Gerald was predeceased by his wife Jenny Ostry; his eldest son Thomas; parents, Alexander Ostry and Anne Melnychuk, younger brother Laurie and younger sister Mae Lewin.
The family would like to acknowledge the considerate and very loving care provided by the staff at the Colonel Belcher Veterans Long Term Care Facility in Calgary and prior to that, the River Ridge Independent supportive living facility in Winnipeg.
At his request cremation has taken place. There are no immediate plans to have a Celebration of Life, however, at a future date Gerald will be finally laid to rest beside his wife Jenny in Winnipeg.
If friends so desire, memorial tributes may be made directly to the charity of the donor's choice.