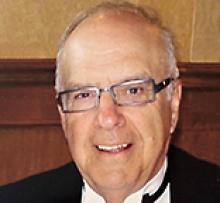 On a clear morning, surrounded by jazz and his family's love, David Grant Frayer passed away peacefully after 80 remarkable years of life. Father, grandpa, husband, and the finest man, Dave was the proud cornerstone of our family. There are few words that can rightly describe his courage and strength, and we are incredibly grateful for the privilege of loving him.
For us and his friends (and there are many), Dave will be remembered for his spirit and trademark humour. A skilled and respectful listener, he loved jazz and blues, the law and community service, and enjoyed Winnipeg Folk Festivals, dog walks, and backyard barbecues. He was a loyal Jets and Bombers fan, did annual trips to Chicago with friends to see his beloved Cubs at Wrigley Field, and played Oldtimers hockey until his knees said otherwise. Dave looked forward to spending the racing season at Assiniboia Downs where with friends he was an owner of Silver Mane Stables, and for decades he was a fixture at the Winnipeg Winter Club. There was regular travel to Detroit Lakes for golf, Puerto Vallarta for dark rum and popcorn, and he saw most of Canada from coast to coast. He took cruises around Alaska, the Mediterranean and the Caribbean, floated in the Dead Sea and looked over the Sea of Galilee in Israel, walked among the ruins at Petra, Jordan, and stood on the Great Wall of China. Still, having grown up in Wildwood Park, Dave was perhaps the most content at home in Winnipeg.
But Dave's world mostly revolved around Jane, his true love and wife of 51 years. They shared a life of laughter and love, of dancing and travel. Their dedication to each other was, and remains, humbling. Dave was a best friend to his sons, Chris and Kevin, and always provided guidance, honesty and understanding, and he loved their partners, Miriam and Janis, like they were his own daughters. His companionship will be sorely missed in the lives of the Frayer grandsons, Isaac, Ivan, and Jetsun, and by his extended family, Lubo and Toni Jezik, and Verna (Frayer) and Doug Danylchuk. Dave's closest friends had truly been friends for life and travelled closely alongside him in his final journey.
Dave's roster of professional achievements was shaped by his extraordinary career as a litigator, including a 20-year tenure as Director of the Winnipeg Regional Office, Department of Justice Canada. Masterful in the courtroom, Dave was also a mentor to lawyers who fondly called him, 'The Chief'. He had two Queen's Council designations - a rare achievement - as well as numerous awards and citations, including the Royal Military Institute of Manitoba's Twice the Citizen Award for his military and legal career. From a young cadet in 1960, Dave went on to serve in the Navy's JAG Reserve Branch as a military judge, retiring in 1996 with the rank of Commander.
This genuinely kind man was a giant to anyone who knew him, even as the cruelty of ALS diminished Dave's ability to move and speak. We are profoundly grateful to MAiD and their team for showing such compassion and clarity, in offering Dave his choice and the dignity and peace he so richly deserved. We would like to thank the staff at Deer Lodge Centre and Seven Oaks Hospital for providing comfort and care. His strength and resilience were striking, and while we are impossibly sad to lose him, we could not be prouder to love him and to feel his love.
Dave did not want the fuss of a service, and instead of flowers we encourage donations to Rossbrook House Foundation to support their work in the spirit of his good heart: www.canadahelps.org/en/dn/m/18221/donation
Or, as a tribute to Dave's lifelong love of music, please consider supporting the Winnipeg Folk Festival: www.winnipegfolkfestival.ca/support/donate/
There is a quote about grief - author unknown - that resonates with us as we find comfort in honouring a life so incredibly well-lived. It says, "Grief never ends but it changes. It is a passage, not a place to stay. Grief is not a sign of weakness, nor a lack of faith. It is the price of love."