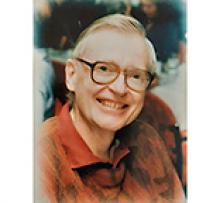 J. Brenton (Brent) Stearns passed away peacefully on Friday, November 5, 2021, at St. Boniface Hospital after a sudden and severe heart attack.
Brent was raised in Cranford, New Jersey. His parents were both English teachers, his father principal of the local high school. He received his Bachelor of Arts degree from Bates College in Maine. Possibly influenced by the family patriarch, his grandfather, who was a Presbyterian minister, Brent decided to pursue a career in the ministry. After several years of study at the University of Edinburgh he received his Bachelor of Divinity degree. It was while he was at Princeton Theological Seminary that he realized that his religious beliefs had changed and that he was not suited for the ministry. He enrolled at Emory University in Atlanta where he received his PhD in philosophy.
He held appointments in philosophy at several U.S. universities. In 1970, on the advice of a colleague, he successfully applied for a position in the Philosophy Department of the University of Winnipeg; he remained here until his retirement in 1997. The move to Canada with his family (wife Louise White, small children, Vallie and Edwin) was a major decision, but one that he never regretted. Following the breakup of his marriage, he met and married Lily Kowal. They celebrated their 40th wedding anniversary recently. While he was a staunch Canadian citizen, he never shook off his emotional attachment to the land of his birth.
A trip to the Soviet Union in 1988 sparked Brent's interest in Ukrainian and Russian culture. On the urging of a friend, David Mackling, he was persuaded to join a Ukrainian mandolin orchestra. His participation in the Winnipeg Mandolin Orchestra gave him much pleasure. For someone whose ancestry could be traced to 17th century colonial America, he was somewhat amused to find himself on the boards of the Association of United Ukrainian Canadians, the Ivan Franko Museum, and the Canadian Society for Ukrainian Labour Research. As well, he sang in several Ukrainian folk choirs. He said that these activities enriched his life.
Brent was a member and past president of the Manitoba Association of Rights and Liberties. He was a member of the University of Winnipeg Retirees Association and the Manitoba Historical Society. He was a long-time member and supporter of the Unitarian Universalist Church. He supported many anti-war and progressive social causes.
In private life he had many interests. Chief of them were baseball, trains, and early country music, especially bluegrass. The elements of baseball that he loved were the quirky combination of strategy, luck (good and bad), and talent. For most of his life he had been a New York Yankees fan, but became less interested in them. He was an enthusiastic supporter of the local Winnipeg Goldeyes baseball team. He loved trains: riding them and watching them. When a long line of cars was held up by a passing freight train, Brent's face was the only one shining with happiness, watching the cars slowly lumbering across the tracks.
Books were a very important part of his life; he belonged to a book club for decades. A lover of classical and folk music, Brent played the guitar, piano, and accordion, mostly for his own enjoyment. His ability to play the accordion by ear endeared him to his mother-in-law who would often ask him to play her favourite songs. His son Edwin, however, was not as thrilled with the accordion, warning him that it would ruin his social chances. His children shared Brent's love of country and bluegrass music, daughter Vallie often singing with him.
A quiet, self-effacing person by nature, Brent possessed many qualities of character that endeared him to his friends: kind, compassionate, and non-judgemental. To his wife and family he was a beacon of light and wisdom. Despite having problems following plots on PBS' Masterpiece series he was adept at sorting through legal documents. When a group of people (including several lawyers) decided to challenge a large financial institution and were taken to court, it was Brent's argument that the presiding judge cited in the final judgement. Although they lost the case Brent was nonetheless pleased with this small triumph.
He supported Lily in her activities, jokingly comparing himself to Prince Philip (who, needless to say, did not have to lug boxes of stuff for his wife's fundraising activities). He was a loving husband, companion and friend. He was immensely proud of his children, pleased with the kind of people they'd become.
Brent was predeceased by his parents, Brenton and Mabel, and by his sister Carolyn. He is survived by his wife Lily; children, Vallie Stearns-Anderson (Kevin) of Sackville, New Brunswick, and Edwin White Stearns (Nicole) and grandchildren, Gordon Stearns and Gabrielle Stearns of Atlanta, Georgia; sister Elinor (Ellie) of Cary, North Carolina; sister-in-law Jenny Carter (Edward) of Winnipeg; and many cousins, nieces and nephews.
Following his wishes there will not be a public funeral. Flowers are gratefully declined.