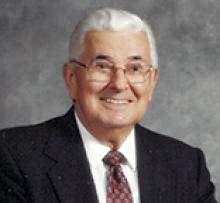 William (Bill) passed away on November 10, 2021. He was born April 25, 1929.
He leaves behind his two sons, David (Gisèle) Okrusko and Gary (Claire) Okrusko, his two granddaughters, Danielle (Kevin) Parsons, and Kendra and two great-grandsons, William and Thomas Parsons. He was predeceased by his wife Nadia in 2017 after 64 years of marriage. He was the last living sibling of the large Okrusko family. He leaves behind many nieces and nephews of the Okrusko and Basisty families to remember his zest for life.
He worked for CN Railways becoming a fully qualified carman in 1985. His passion was bartending at private functions, synagogues, the Winnipeg Convention Centre and the Centennial Concert Hall. He travelled with his family on many trips in a Starcraft tent trailer across Canada and the US. Other major trips included cruises to Alaska, the Mediterranean, and Panama Canal, trips to Ukraine, Australia, Asia as well as the annual month-long escape to Hawaii for 27 years.
The family wishes to thank the staff at Amber Meadow Assisted Living for their attentive care and support over the past five years, along with WRHA Home Care staff that allowed his time at the facility to be comfortable and stimulating. Dad, you will be greatly missed and fondly remembered.
A private family funeral will be planned with interment at All Saints Cemetery.
In lieu of flowers please donate to a charity of your choice in his memory.