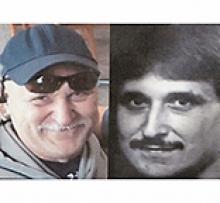 With heavy hearts we announce the passing of Bob on November 1, 2021 at the age of 66 at Health Sciences Centre. He was born June 30, 1955 in Winnipeg and grew up with many wonderful memories in this city.
Bob will be missed and remembered by his brother Brian (Marjorie); nephews, Chris (Jessica) and Mike; great-nieces and nephews, Kayden, Adriana, Dayton, Jace, Chelsey and Keandra; aunts, uncles, cousins and second cousins.
Bob was predeceased by his parents, Victor and Dorothy Magel; grandparents, Nick and Anne Miller; Uncle Bob and Aunt Sandra Miller; Uncle Gary Miller; Aunt Joyce and Uncle Jack Millar; Uncle Dave Magel and cousin Jennifer Steitzer.
All his life as a basketball player and referee, he is remembered for his playing career at Sisler High School where he was a member of the Provincial Championship team of the undefeated 1972-1973 Spartans. That team was inducted into MHSAA Hall of Fame in 2011. In his Grade 12, he was selected a city and provincial all-star as well as an all-star in the Golden Boy Tournament.
After graduation, he went on to star with the University of Winnipeg Wesmen where he won numerous honours. He was selected as a CIAU/CIS all Canadian in 1979 - 1980 as well as the Wesmen Athlete of the Year and was a member of the Canadian National B team in 1976. He went on to a career as a basketball official where he was well respected and appreciated.
Bob also coached football with the Winnipeg Nomads and Eastside Eagles. After coaching was over, Bob started refereeing football.
Bob was employed for over ten years at Marchant's School Sport.
In the last few years, Bob struggled with various health issues but did not let that stop him.
A Celebration of Life will be held at a later date.

Condolences for Bob's family may be left at www.alternacremation.ca