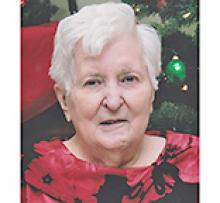 Jean passed away peacefully on November 12, 2021 at the age of 97 years.
She was predeceased by her husband Ben (1998) and her two siblings, Ross and Ernie Oades. She will be sadly missed by her children, Jim (Maureen), Joan (Glen), Judy (Cleve), as well as numerous grandchildren, great-grandchildren and great-great grandchildren.
Jean was born to Wilfred and Pearl Oades in Winnipeg and grew up on her family's grain farm in Lillyfield, Manitoba. After graduating high school, Jean worked in Winnipeg as a bookkeeper for Robin Hood Flour, Inc. for several years.
Following her interest in education, she later moved to Lake Francis to teach elementary school. It was in this community that she met Ben Malcolm who had recently returned to his family's home after serving with the Canadian forces during the Second World War. Ben's family farmed next-door to the school, and he was soon destined to become the love of her life. She and Ben married and bought a small farm in the Lake Francis area. Several years later they purchased a larger dairy farm close-by, and here they raised their three children. They operated the dairy farm until their retirement.
Jean was an active member of the Lake Francis Women's Institute for many years when her children were young. Later she and Ben established a small meat shop and began processing beef for friends and neighbours. After retiring from the dairy, Jean began a ceramic business in their basement; making her own greenware and teaching ceramic classes. Ben was her greatest support. Their basement soon became a community gathering place where folks spent many enjoyable evenings and afternoons designing beautiful ceramic creations while visiting with friends and neighbours. Jean's famous gingersnap cookies were a staple at every class.
Jean remained on the farm for several years after Ben's passing in 1998. Later she moved to Oak Park Lodge and Estates in Woodlands. Towards the end of her stay at Oak Park Lodge, Jean received several years of wonderful care from a team of professional and caring home care workers. In 2018 she moved to Rosewood Lodge Personal Care in Stonewall, and there she lived until her passing. Jean was most content in the care of her 'Rosewood family', and her children are most grateful for the excellent quality of truly personal care she received there.
Respecting Jean's wishes, a private family funeral and interment will be planned.
In lieu of flowers, donations may be made to Rosewood Lodge Personal Care.