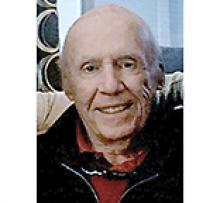 With profound sadness, the family of Mort Corrin announces his passing on October 31, 2021, at the age of 89.
A graveside service was held on November 2, 2021 at Rosh Pina Cemetery, with Cantor Tracy Kasner officiating. Pallbearers included his sons Blair and Bradley, nephews Philip Corrin and Benji Sepke, and cousins Howard Lavitt and David Senensky.
Mort was born in Winnipeg to Harry and Rae Corrin. He attended Machray School and St. John's Technical High School, where he was a talented athlete. As Harvey Rosen wrote in the Jewish Post & News in 2013, "A diminutive chap, Mort Corrin, who was but five feet and seven inches tall and tipped the Toledo's at 160 pounds, was a star running back who was also his league's leading scorer. Not to mention that the former insurance salesman had speed, was a good pass catcher, and also ran back punts." In 1954, Mort played with the Winnipeg Rams Football Club when they won the Canadian Intermediate-Senior Championship. He was also an avid golfer for many years and was a member of the Garden City Senior Golfers, a club founded by his brother Sydney. Mort was proud of his induction into the Football Manitoba Hall of Fame in 2013 and the Manitoba Jewish Athletes Wall of Honour in 2014.
Mort married the love of his life, Val Cook, in 1957 and they lived briefly in Denver, Colorado before returning to Winnipeg where together they began raising three children - daughter Debbie and sons Blair and Bradley. In the mid-1970s, the family moved to Toronto where Mort had a successful career as a Regional Manager for London Life. Following Mort's retirement in 1992, he and Val made their summer home in Winnipeg, while enjoying winters in sunny Florida.
Mort was predeceased by his daughter Debbie, brother Sydney, and sister-in-law Eleanor. Left to cherish his memory are his loving wife Val, his children Blair and Bradley, son-in-law Steve Douglas, sister-in-law Elaine James, and many grandchildren, great-grandchildren, nieces, and nephews.

May his memory be a blessing.