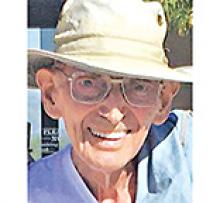 John, 88, passed away at a Tucson care center on November 2, 2021. John was born on March 19, 1933 in Winnipeg, Canada to Rudolph and Bertha Peterson. He had one brother, Fred Peterson, who lives in Rancho Palos Verdes, California.

John studied in a number of fields including engineering, and got an Honors English B.A. degree from Winnipeg's United College in 1953. He then embarked on a 53 year career in the construction industry in the soils-testing field, moving back and forth among numerous sites across most of the Canadian provinces and many US states. John formally immigrated to the USA, first getting his Green Card in 1968, and then becoming a US citizen in 1991. He first arrived in Tucson in 1984, settled there in 1992, and wound up his working career with a 13-year period with the City of Tucson before retiring in 2006.

John was an avid hiker and mountain climber. He shared his outdoors enthusiasm, knowledge and skill with many friends and associates through years of hiking and climbing with them. John never married.

John was devout in his religious convictions, and he worked with and supported gospel ministries involved in spreading the messages of preachers he admired and regarded as prophets.

And John was so generous, almost to a fault. He delivered and served for a Tucson meals-on-wheels organization. He spent uncountable volunteer hours with a local library. He lobbied for and financially supported several prison inmates who were perhaps unjustly incarcerated and needed help. His door was open to anyone who showed up asking for help. But his main after-hours thing was always the hiking and mountain-climbing.

In the past couple of years, John's health gradually declined. He had to give up the active outdoor life and the mobility of traveling around in his car. He remained in his apartment of about 30 years, relying more and more on others to help keep him sustained. In August 2021 he left that apartment when a medical incident led to his hospitalization and then his discharge to a care facility. He was feisty to the end, not always following the advice of his nurses and other staff, but always appreciative and thankful for their care.

John passed away on November 2, 2021. And as he had planned for in advance, on November 15 he was buried at Tucson's East Lawn Palms Cemetery.