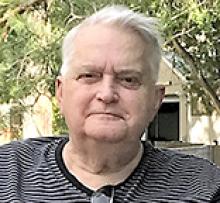 Gordon Maurice Barton of Winnipeg passed away November 13, 2021, at the age of 82.
He leaves to mourn, his wife Marguerite (nee Morin) and his three sons, Darrell and Shannon Barton (David, Laura, and Tyler), Alan and Rose Barton (Julia and Eric), Marty and Colleen Barton (Willow and Rohan), and his daughter Liane and Allan Haviland (Simone, Celine, and Janelle). He is also survived by his brother John Barton, and his sister Louise (Terry) Lagimodiere.
Marguerite was the love of his life. They were married for 61 years and spent 45 of those years living in Anola with their four children. Gord started working as a gas jockey at the age of 12, later he worked for CNR, first in the office, and then as a CN Police Officer. Gord joined the Winnipeg Police Force in 1969 and retired in 1995. In his retirement he became involved with Tourism Manitoba, worked for the Taxi Board, was a General Manager at Unicity Taxi, and finally a shuttle driver for St. Andrew's Airport.
His passions as a young man were building cars, drag racing, he was a member of the Winnipeg Roadster's Car Club and Autorama from its beginning till the late 1960s. As he got older, his passions changed to fishing, hunting, being involved in his community, and especially his 10 grandchildren.
Gord was supportive to many and always willing to help family and friends. If he could, he would have fixed everyone's world.
Cremation has taken place and he will be interred privately in the spring.
There will be a Celebration of Life on Monday, November 22 at 1:00 p.m. at the Royal Canadian Legion Branch 215, 215 Maxwell King Dr., East St. Paul, MB. Family and friends can also join virtually for the live streaming of the service by visiting Gord's memorial page at seasonsfunerals.ca and clicking on the photos and videos tab. Memories and condolences may also be left on his page.
Government-issued "Vaccine Proof" and valid government-issued photo identification for all attendees at the service and reception is required, by order of the Chief Provincial Public Health Officer. Masks are mandatory.
In lieu of flowers, please consider donating in his name to Heart and Stroke Foundation, Pediatric Oncology, or The Salvation Army.