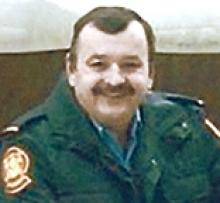 It is with profound sadness that we announce the passing of Ken Joss in the early morning hours of November 17, 2021, at Selkirk General Hospital after a year long battle with Non-Hodgkin Lymphoma.
Ken kept his mom and dad on their toes with his uncanny, fun-loving antics from an early age. In his youth he excelled in track and speed skating. In Grade six for sportsmanship, Ken was awarded the Buzz Horn Trophy. As a teenager Ken became the proud owner of a brand-new Dodge Dart Swinger. He was constantly modifying his Dodge for drag racing competitions. His efforts weren't in vain as he won several trophies. With his mechanical ability along with his dad's know how and experience it made them a great team when working on their cars, trucks or heavy equipment.
Ken's distinguished career as a Winnipeg Firefighter for 32 years allowed him to branch into a side business of clearing snow in the winter and street sweeping in the spring. Ken retired from the Winnipeg Fire Department as Captain in 2004.
Ken had five loves in his life. First and foremost was his son Zachary. In the summer whether riding their motorcycles or fishing the back country near Ingolf, Ontario, they were inseparable. In the winter they enjoyed ice fishing. This past Father's Day Ken posted "Drag racing and riding motorcycles with my Son." Do I have anything to complain about in life, not one G.D. thing. On Zach's 23rd birthday Ken posted "Zachary is my mark in life and makes me totally complete". Ken's second love was his first wife Georgina whose untimely passing left a huge void in his life. Ken's third love were his "Hogs". When on a ride nothing else mattered. His fourth love was his "other home" at Ingolf, Ontario. He was a master entertainer welcoming his army of friends and family to enjoy his culinary skills. Fifth but no less important to Ken was his love of family and friends. He had an art of captivating everyone with his endless humour even if it was at their expense.
Ken had many interests and hobbies. He was a perfectionist at whatever he did. He cherished his time salmon fishing in B.C. and his 25 annual trips to Sturgis.
Ken was meticulous in constructing the addition to his cabin with the help of his friends. If he didn't know how to do something, he researched it to the "nth" degree. He took great pride in whatever he did.
Ken was predeceased by his first wife Georgina and his parents, Mary and Daniel Joss. Left to mourn his passing are his son Zachary, siblings: brother Danny (Janice) Joss, sister Eleanor (Garry) Winch, brother Keith (Marion) Joss and sister Jacquie Joss, along with numerous cousins, nieces, nephews and an army of friends including Wayne, Jackie, Dave, Kevin and Kirk to name a few. Ken is now together with his family and friends who have preceded him.
Cremation has taken place. There will be no formal service. A Celebration of Life will be held in the summer for family and friends. Ken's wish would be that each and every one live life to the fullest and be true to yourself.
The family would like to thank all the doctors, nurses and health care workers for their compassionate care given to Ken.
In lieu of flowers, the family requests a donation be made in Ken's name to CancerCare Manitoba.


Peacefully on Wednesday, November 17, 2021, Ken passed away at the Selkirk General Hospital.
Longer notice to follow in next Saturday's paper.