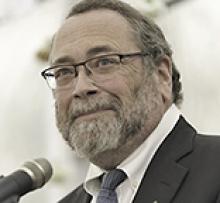 David passed away in Winnipeg on Wednesday, November 10, 2021, from complications from leukemia. His daughter, Jacqueline Donner, was with him. It being Manitoba, a snowstorm prevented Becky Barrett, his partner for many decades, from driving from Gimli to be by his side.
David is lovingly remembered by his partner Becky, daughter Jacqueline, sister Jennifer (Steve), stepdaughter Laura (Marty); stepgrandsons, Adam and Ian; niece Maia (Aidan); and great-nephews, Theo and Jasper.
David is predeceased by his parents, Gertrude and Jack.
David was whip-smart from the get-go. Early on, he made a name for himself as an outstanding chess player, just like his father.
David studied political science at the University of Manitoba, where he plunged into student politics and became the much-admired chairperson of the University of Manitoba's student union. A keen student of electoral systems, David helped persuade the student union to use a ranked ballot system for choosing its president.
David left university a few courses short of a B.A. to join the Manitoba NDP as a staff organizer.
So began his 45-plus-year career promoting social democracy in Canada. Moving back and forth from Winnipeg to Ottawa and working in both provincial and federal politics were features of David's remarkable life. Provincially, David did stints as the caucus research director, provincial secretary, director of communication, provincial president, and executive assistant to Manitoba premier Howard Pawley. At the federal level, David was assistant to MP Terry Sargeant, federal president, federal treasurer, federal secretary, and chief of staff to the federal leader, Alexa McDonough.
Before he retired in 2011, David's last formal assignment was with the provincial government's Treasury Board, when he managed to finish the course requirements for his B.A. A professor noted that he felt that many times he was the student, and that David was the professor.
Across Canada, David is remembered by New Democrats and non-New Democrats alike for being kind and generous with co-workers, party members, and his fellow citizens. Many said they felt a genuine bond with him, whether briefly during a provincial or federal election or a friendship that spanned decades. He was a mentor to many and known for offering sage counsel and astute insight to those seeking his advice, which occurred frequently.
David was a longtime follower of the Jets, Bombers and Goldeyes. He also took great pleasure crafting delicious food, and enjoyed Indian cooking, shawarma, an excellent burger, and fine roast beef. David kept up with best and latest restaurants.
Donations in his memory may be sent to the New Democratic Party or CancerCare Manitoba. Please also have a meal at a locally owned restaurant to support small business.
A memorial service will take place in the new year.

Condolences may be sent to
www.neilbardalinc.com