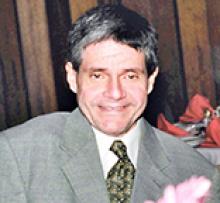 On World Kindness Day, November 13, our beloved Terry gently passed away in St. Boniface Hospital. We surrounded our brother, wished him safe passage while he embraced Babar, his cherished stuffed elephant.
Terry was born in Portage la Prairie in 1947 to Marie (Kitson) and Murray Guinn. He was soon followed by Cynthia, Rodger, Clark, Brent and finally Diana. The tiny wartime house on Sixth Street was seldom a scene of serenity. But it definitely was filled with laughter and love and noise - lots of noise.
Terry, diagnosed with Asperger's Autism, was never deterred from his many eclectic interests. He was most passionate about reading: collections and tomes on history, mythology, railroads, geography filled every nook and cranny.
Terry had a loving connection to Portage and area. He reminisced often about Victoria School, Delta Beach, the Sixth Street Gang. He was a beautiful soul and cared about everyone he met. He never forgot a name. He remembered names of spouses and children and of course, pets.
Perhaps Mom and Dad had a moment of divine intervention when choosing Terry's name. In Irish Terrence can translate as "tenderness"; in Latin "God's Grace". He encompassed both qualities.
After Mom died in 1991, Terry was eventually brought under the wings of Pulford Community Living Services. He thrived. Under their care, Terry and his rescue cat, June, lived happily for years. One of Terry's final wishes was expressed to Diana and Brent: "I want to be certified as an official Santa Claus. Then I can be responsible for collecting June's Christmas presents."
The family is profoundly thankful to Cynthia's dear friends, Virginia and Jim for adopting Terry's sweet Lady June. We know she will be treasured as Terry would have wished.
Terry was predeceased by his parents, Marie and Murray Guinn, grandparents, numerous aunts and uncles and cousins.
He leaves behind his siblings and their spouses: Cynthia (Ken), Rodger (Marion), Clark (Debbie), Brent (Shirley), Diana (David). His siblings' children adored him as did the host of great-nieces and nephews. He will also be missed by many cousins and by his Auntie Gene and Uncle Dennis.
Our lives are forever altered. We will miss our sweet boy. His laughter and his gentle smile lifted hearts. We will strive to honour his spirit of kindness and optimism.
In lieu of flowers, donations may be made in Terry's name to Winnipeg Humane Society, Heart and Stroke Foundation, Pulford Community Living Services, or a charity of your choice.
Cremation and private service have taken place. A summer Celebration of Life is being planned. Terry will be interred in Hillside Cemetery with his parents.


Farewell Darling Brother. Rest easy in the cradle of Mom and Dad's arms.
"We Shall Meet on that Beautiful Shore."

To sign the book of condolences, please visit: www.voyagefuneralhomes.com