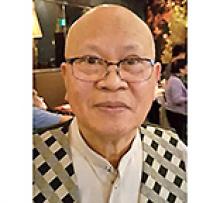 It is with great sadness that we announce the passing of Carlos, with his family by his side, on Thursday, November 11, 2021, after his battle with cancer.
Carlos is lovingly remembered by his wife Rosita, of 45 years; his sons, Richard (Grace) and Charles; daughter Rosemarie (Jason); grandchildren, Chloe, Mateo, Rebecca, Isaiah and Elijah.
Carlos is survived by his youngest brother, Ricardo Jr. (Nemia) in Canada and brothers, Alejandro and Domingo and sisters, Felicula, Basilisa, Teresita, Nenita in the Philippines. Carlos was predeceased by his brother Pablito and parents, Ricardo Sr. and Maria Quinit.
He was born in Pozorrubio, Pangasinan, Philippines, the fourth child of nine children. His father died when he was 16 and took on the responsibility of supporting his mother and younger siblings. At 21, he served in the Philippine Navy for seven years and became a Marine Engineer. While in the navy, he earned a Military Merit Medal and a Military Commendation Medal, he was proud of his service. He married his wife Rosita in 1976 and immigrated to Winnipeg. They sponsored his younger brothers, Ricardo Jr. and Pablito family to Winnipeg. Carlos made many sacrifices and continued to support his family in the Philippines. When he arrived to Winnipeg, he worked at Indal Wall Systems as a Component Systems Operator and then a Foreman. When the company closed in 1991, he studied and worked as a Heavy Duty Mechanic. After retirement, he went on to graduate with a Foundational Diploma in Ministerial Studies and his purpose was to serve God.
He enjoyed being active and took pleasure in gardening, camping and being outside even just tinkering in his backyard. His most enjoyable activity was walking for leisure and exercise, unfortunately his illness had taken away his ability to walk in his last five months. He loved to sing and spend time with his family and grandchildren. He had a kind and caring heart and always helped anyone in need. He would start a conversation with anyone and made many friends. He lived a modest and humble life and was a devoted member of his church.
Carlos and his family are very appreciative and thankful to the medical staff at the Riverview Health Centre and CancerCare Manitoba that took care of him.
Pastor Jesse Fortaleza will officiate over the memorial service celebrating Carlos' life on November 21, 2021 from 4:00 p.m. to 12:00 a.m. at Mosaic Funeral. Interment will be on Monday, November 22, 2021 at 11:00 a.m. He will be laid to rest in Brookside Cemetery.
Carlos was a former navy sailor and by coincidence he passed away on Remembrance Day. We will remember his strong will and courage in fighting his illness, but most of all, remember his love, kindness and generosity. He was an inspiration to us and we are very proud of him. We will all miss the comfort of his prayers and the way he lived his life faithfully. Carlos is walking with God now.